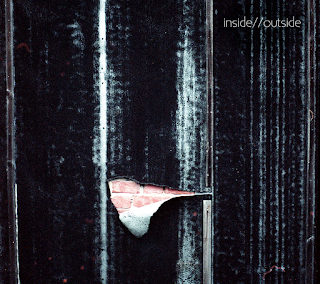 Playing almost like a soundtrack to the DC Animated Movie, Batman Year One based on the comic book series by Frank Miller, this New York trio sets the scenery of Rock In Opposition, Jazz, and Krautrock combined into one as if Radiohead, Magma, Miles Davis, and Tangerine Dream had teamed up to create this mind-blowing electronic experimental album like you’ve never experienced before from start to finish. Inside // Outside is one of the most remarkable up-and-coming bands to carry the spirits of the three genres and it’s a knockout with their first sole self-titled debut.

The band considers Adam Neely on Bass, Wim Leysen on keyboards, and Shawn Crowder on Drums and percussion. And their music cast a magic spell with electronic passages filled with Avant-Garde noises and Fender Rhodes with Moog Synths carrying the reminiscent of the early ‘70s and ‘80s 8-bit video game music and Bass guitar lines creating some thumping and touching workout like a jet engine flying over you 600 miles per hour. Wim Leysen is creating some beautiful layered sound on his keyboard to capture the sounds of Herbie Hancock, Dave Stewart of Egg, Mike Ratledge, and Thelonious Monk as well.

Thunderous Bass work along with some Fuzz tone structures to create a heavy metallic razor sharp noise that comes out of nowhere, Neely soars into the skies as he goes along for the ride and drummer Shawn Crowder percussion work is a wowing experience that goes from fusion into electronic beats that sets the dystopian nightmare. And adding the sounds of the string quartet, soprano saxophone, trumpet, and guitar, you have embarked on a strange, surreal, nightmarish and amazing journey that will take you into the distant cosmic voyages of time and space.

With alarming loud noises, gadgets, and experiments to go along with Inside // Outside’s inspirational influence in their music, it is quite clear that this group are hopefully going to receive word of mouth from the underground scene and the Jazz Rock community, which is quite understandable into ambient beauty, moving and soothe compositions into a wildly enjoying pleasure. I have listened to this three times already, and I have to say I’m completely impressed of what I’m hearing and they make the music an amusing yet exciting experience that I can’t wait to see what will they will have next up their sleeves for the near future.
Posted by znathanson at 9:08 PM