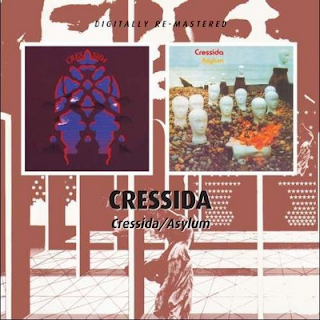 While they were sort of similar to the Moody Blues with a jazzy art rock orientation to their sound, Cressida’s music could have given the band a huge burst with their sound just as more layered upbeats and groove elements as their songs would fit the landscape. Formed in the late ‘60s, the band considered; Peter Jennings (No not the Peter Jennings from Nightline) on keyboards, lead vocalist Angus Cullen, late guitarist John Heyworth, bassist Kevin McCarthy, and drummer Iain Clark. The band had an eerie and dark passage with a lot of material that was moody, sad, and touching.

That was with their first sole self-titled debut album originally released on the Vertigo label in 1970 and a touch of the soothing psych-pop meets landscape dreamland beauty in the mixes, you could tell that this was a band that could have been bigger than The Moody Blues and would have had Paul McCartney’s feet tickled if he had heard this, he would have signed the band to Apple and would have been prog’s answer to the Beatles. Touched with the Jazz-Psych-Pop flavor of the dance crowd that would have the mods going crazy over such as the opening track To Play Your Little Games, Home and Where I Long to Be, and the flourishing roar of Depression also view the psych freak out work out exercise that John Hayworth does that would have a jaw dropping momentum and would have had Jimmy Page bowing down to him.

With Jennings ballad-like swirling keyboard work, Angus Cullen’s voice, lays the groove down and for Peter, he gives Angus a chance to breathe in and its makes perfect sense. On One of a Group, you could hear a pre-Genesis sound on Firth of Fifth as if he had replaced Peter Gabriel , the band would have continued to be in a Prog-soul touch. But with a flourish organ exercise and fuzzy guitar solo, it works like a charm. Not to mention the Thelonious Monk piano feel at the end that is laid-back.

With Asylum, released in 1971, Cressida moved into an earlier reminiscent of the symphonic rock sound, but they still had the Jazz Rock flavor in them. It was darker and hidden from their previous debut album. And John Heyworth left as John Cullen along with session musicians Harold McNair and Paul Martin Layton, it was almost an experience that you would never forget. It had more of a sadness of sorrow which dealt with moving compositions and uplifting soars like no other.

You can hear the orchestral sounds on the title track, which is a killer. Featuring a crisp string quartet, explosive organ and guitar solo as it could have been a live favorite for the fans to have their mouths water over. There’s also some pop flavored soul to it on Goodbye Post Office Tower Goodbye and the mourning acoustic folk finale, Let Them Come When They Will while Reprieved and the mystical Summer Weekend of a Lifetime could have been written for the 1978 animated film, The Last Unicorn.

Even though they split up to pursue other projects with Uriah Heep and Black Widow, these two albums are now considered the unheard gems of the obscure Progressive Rock sound of the ‘70s and they are a must have in the fans collection. You won’t be disappointed, enjoy the fabulous ride of Cressida.
Posted by znathanson at 1:09 PM

CORRECTIONS: Harold McNair was never in Cressida--he played the flute on "Lisa" as a session player. Paul Layton was another of Ossie Byrne's artists whose only claim to fame with Cressida was that he lent them his Gibson J-200. You can hear it (played by Angus) on "Spring '69".

These two myths have followed Cressida around for years ... hopefully, this will put these rumours to rest!

Thank you for letting me know, I was a little confused. I'll go ahead and edit the part out.