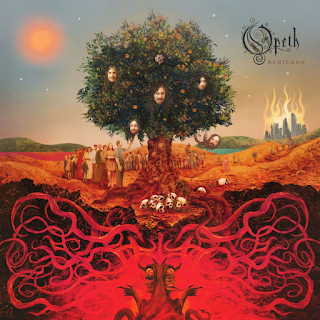 Now there will be a drawing a line in the sand for some Opeth fans whether they prefer the death-growling era or the Prog-soft sounding arrangements that is exampled on Damnation, but might I digress as we move forward as Mikael Akerfeldt goes into the ‘70s prog sound with a mellowing taste on their new album, Heritage. This is moving leap forward for Opeth because even though they were giving the growling voices which they are known for in their early days in the ‘90s in the Death Metal scene, Heritage is a home run in the baseball fields of Prog Rock like no other!

We have the jazzy piano haunting opening title-track to get us going that is almost set to a mournful apocalypse aftermath as it kicks in with the time signature changing speed racing rocker The Devil’s Orchard, filled with the King Crimson Red-era with some meaningful and angry chords and not to mention the line “God is Dead!” It looks as if Mikael is paying homage to thrash metal heroes Slayer as if to let them know, he still has the Metal spirit in him and never let’s go the genre.  I Feel The Dark has a gothic folk touch, but kind of carries the Bo Hansson treatment.

And even though there’s a bit of a chugging mid-section, I just wish that he could have worked on the track a little bit more and give it a real bullet speed. Speaking of bullet speed, a perfect example is Slither, this time they go through the race track as it goes 600 miles per hour with some impressive guitar lines, organ crunches, drums flying off the wall, and Mikael’s vocals will give you a mighty touch like no other.

Nepenthe gets the prog genre up a notch, cranking the volume up a notch in the realms of the Gentle Giant album, Acquiring the Taste homage with a bit of Martin Mendez’s bass lines going through a Jaco-like reminiscent as Per Wiberg pays homage to Kerry Minnear and Martin Axenrot goes through the patterns in the realms of Neil Peart, shows that the band are not ripping off the old guard, but sort of paying tribute to them and lets them know they still have the touch and the power.

With the homage of the Acid Folk touches of Haxprocess and the middle-eastern turned Mars Volta powerhouse on Famine, and The Lines in the Hand gives Opeth a time to move away the boundaries for a while as they do a psychedelic jam session that would have made the fans open their mouths saying, “What the hell just happened?” It gives them time to go into the mellotronic Crimson Lizard-era sinister beauty of Folklore with a pure midas touch as it segues into the finale, Marrow of the Earth, a wonderful finale to close the album with an acoustic mellowing Ottmar Liebert classical boundary that gives Mikael and Fredrik Akesson a chance to pay tribute to Liebert and Hackett. But wait there’s more!

The two bonus tracks which are featured on iTunes if you buy the Special Edition version of the album, Pyre is a mellotron space rock sound while Face in the Snow which at first sounds like a Wes Montgomery guitar intro as it goes into a haunting Moody Blues and Barclay James Harvest-era which might have had Mikael interested to listen to them and could have a touch of the emotional feeling on Heritage. Though it will piss people off that Opeth had moved away from the Death Metal sound, Heritage sees the band going forward into a new light and a new chapter.

So let’s see what Mikael Akerfeldt and the four musketeers will have up their sleeves and see where the new direction that Opeth will take them to.
Posted by znathanson at 11:18 PM