Barclay James Harvest - Taking Some Time On: The Parlophone-Harvest Years (1968-73) 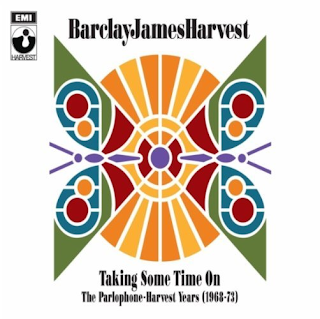 This 5-CD set contains the first four albums that Symphonic Prog Rock band Barclay James Harvest released at the time they were on the Harvest (Parlophone) label as it features unreleased material from the BBC Sessions, Singles, and alternative tracks that were used before they polished it up before the release date. It has been a rocky ride for BJH that has been on. First they lost drummer Mel Pritchard from a heart attack in 2004 and the loss of keyboardist and founder of Maestoso, Woolly Wolstenholme who took his own life after battling mental illness that he was suffering from in 2010.

And if anyone like a young teenager who wants to take a huge swim into the deeper voyages of obscure progressive rock and want to know who BJH really are, this is a must have of the band’s collection and here in this set including liner notes from Classic Rock Magazine writer, Malcolm Dome about the band’s history, this is it. Before the band released their sole self-titled debut album in 1970, the group debut as a singles band at first with the release of Early Morning and Mr Sunshine in 1968.

These two tracks showed the band into a little bit of psychedelic prog pop as the first track almost has a reminiscent of the Zombies Odyssey & Oracle-era while the flipside folk rock beauty, could have been used for the sessions of To Our Children’s Children’s Children. Meanwhile, the band did some sessions for John Peel’s Top Gear Sessions showed the band at their earlier flower psych rock glory.

Songs like So Tomorrow, Eden Unobtainable, Pools of Blue, and the bluesy trip to Small Time Town capture the innocence of freedom and power. Even though these were rare songs, the band moved into Prog territory as they teamed up with Robert John Godfrey who would later form The Enid, decided to give the band a huge kick into Orchestral Rock territory and almost were the answer to the Moody Blues Days of Future Passed-era.

Their first album was a combination of hard rock and theatrical rock with a huge rumbling attitude with mind-blowing homage to the Pretty Things S.F. Sorrow on Taking Some Time On, the spooky folk haunting ballad of The Iron Maiden, and the garage rocker Good Love Child showed a touch of Power Pop with their sound reminiscing of Badfinger’s Magic Christian Music. And bringing the thunder down with electricity of the rumbling 12-minute eerie punch as Woolly acts almost like something out of a Shakespeare play as he gives a disturbing opening speech before going into mass madness with the orchestra on the epic, Dark Now My Sky.

Then all of a sudden, their second album which has become a fan favorite and a classic in their career in 1971 with the release of Once Again, the album itself isn’t track by track, but the songs and emotional beauty including the swarming swoosh opening of the mellotron on She Said, the political theme on pollution of Happy Old World, homage to Tolkien with Galadriel, and the fan favorite, Mockingbird still brings a tear. The bonuses which were featured on the 40th anniversary edition is almost like seeing what tracks were left off.

Including the non-orchestral version of Mockingbird, the dazzling BBC version of She Said for Whistling Bob Harris of the Old Grey Whistle Test that they did including the atmospheric heavenly version of Someone There You Know could have been used for the anniversary edition as a 2-CD set. After tensions and disagreements over Godfrey’s charts on Once Again, the band moved on as they released And Other Short Stories.

The follow up to Once Again, And Other Short Stores was a darker and mellowing album and the band still had the symphonic touch in them and knowing that trouble between them and their record label wasn’t going to be easy. But the songs like the sci-fi opener Medicine Man is another live favorite while Ursula (The Swansea Song) could have been written for the Last Unicorn as they go into a little bit of a Beatlesque attitude with Blue John’s Blues and the dooming After the Day are jaw dropping and breath-taking.

Then came Baby James Harvest, their last album on the Harvest label was done very quickly and they knew that it was time to move on after the release of their fourth album in 1972. The FM Rockin’ sing-along song Thank You could have been a massive single anthem while 100,000 Smiles Out and Moonwater are lukewarm touching swan songs as the upbeat rockin’ single Child of Man, I’m Over You, and the funky glam rock bliss of Breathless showed the band had a touch of healing the world and having a ball to get a sense of humor.

Now while they moved to Polydor label, it’s hard to describe which era of Barclay James Harvest the fans they prefer whether it’s the early days of the mid ‘70s period. It’s almost like drawing a line in the sand and they have to jump which they prefer. But it doesn’t matter, this box set will take you on amazing journey that you’ll never forget forever and ever.
Posted by znathanson at 7:48 PM