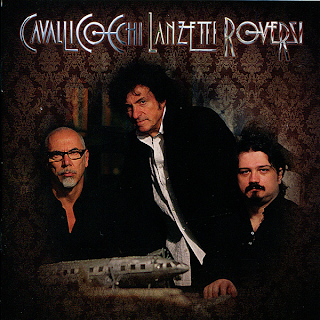 Now, the Italian Prog scene has now sort of revived in a new way here in the 21st century. This time, it’s a trio piece featuring vocalist Berando Lanzetti from Acqua Fragile and PFM, Keyboardist and Chapman stick player, Cristiano Roversi, and drummer Gigi Cavalli-Cocchi, has come to life in a new beginning of eternal life in the realms of the super group format in the realms of ELP, but in a relaxing, dramatic, and melodic atmosphere with their sole self-titled debut album released under the wings by the good fellows at Esoteric. There’s a bit of the Symphonic Prog touch in the styles of the early days of the Nursery Cryme-era of Genesis that has sort of come out of the cavernous cave to embrace it with open arms.

Listening to this album, is a very warm reception because what we have here is emotional and breathtaking from the first and second time you hear it from start to finish as if the trio who not only have a love of the British and Italian Prog sound, but they want to stay true to the roots and close to the sound and make it sound like its 1975 all over again. The pieces that Roversi does on the keyboards including the wonderful roar of the mellotron, will remind listeners of Tony Banks and sometimes Thelonious Monk with some jazzy bits in there including the upbeat whimsical touch on Why Should I? Meanwhile, Lanzetti, vocal sounds still can belt it out.

He has a combination of Peter Gabriel, Roger Chapman, and an older version of Geddy Lee, not in a menacing way, but he really can hit the singing notes so high, that it would make you feel like its Chocolate Kings all over again. Some perfect examples are the cover of Acqua Fragile’s Morning Comes and the opening track, New Life on Mars, which are wonderful songs, dealing with childhood reading sci-fi books and have this classical ballad that it would have been a perfect opening film title that deals with the loss of a child and how to deal with moving forward. And they really add the perfect ingredient’s to the songs and make it their own to see how they would handle the pieces like the oceans crashing throughout the thunderstorm.

The most important thing about these compositions, they are almost like theatrical songs that could have been the perfect score for a ballet dance set to the music in which they created and it has very laid-back warmth and still has the mighty eruptive finale with the punch in the gut that will make you say “Wow!” Their touch on Eno’s By This River, makes it very futuristic and post-apocalyptic while Great Love Does Burn Fast sounds like something that was left off the sessions for Selling England By The Pound with its Gentle Giant meets Beatlesque flavor to it.

The Gypsy-flavor touch of The Late Hour has a dark-like moody piece as Roversi sets the mood like its 1945 all over again almost as if they drew heavy influence of the Black Dahlia murder scenery in LA as if they pay tribute to the disturbing crime as the closing, Blue Boy Under an Ethnic Sky, with its PFM sound to the touch, is a wonderful way to close the album as the curtain comes down with a heavy applause. Now if this is one hell of a debut album, you guess it! Let’s see what CCLR have up their sleeve because they have a long journey ahead of them.
Posted by znathanson at 12:31 AM