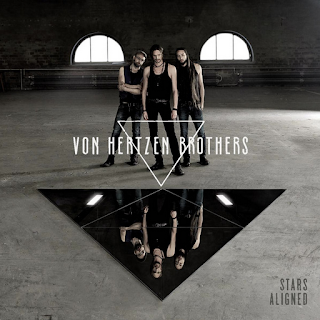 Taking the influences of Muse, Pink Floyd, and the Foo Fighters up a notch, the Von Hertzen Brothers have really got a huge influential sound of Progressive and Alternative Rock like no other and it’s hard to imagine that this trio know the score about taking the indie sound into a different level. What they do is put a little bit of prog into the punch and the result is phenomenal and with those three bands and add a little sugar of early Queen into the mix, the Brothers really make music into something that is quite out of this world.

Here on Stars Aligned, the trio put a touch of Prog-Pop with a vengeance with a bit of the song and melodic touches. While the ingredients work and having achieve a cult status in their hometown in Finland and a wonderful job at High Voltage according to Classic Rock Magazine, the future is ready for the Von Hertzen Brothers. Are they the next Muse? Maybe, but let’s get to the album and see what makes it a kick-ass album.

Miracle opens the album off as a moody 20-second dreamland nightmare before going into volcanic guitars, synths, and pounding drums that sort of realms in the Mars Volta’s Bedlam in Goliath-era while Gloria almost sounds like a sequel to Knights of Cydonia with its spaghetti western guitar licks and epic vocalization in the background that is quite breathtaking and could have been used in the Man With No Name trilogy and would have Ennio Morricone’s feet tickle for joy over this roller-coaster track.

Meanwhile on Voices in Our Head, which has a ‘80s electronic synth new wave retro sound, deals with isolation, Post-Traumatic Stress Disorder, and hallucinations with a mesmerizing eerie haunting guitar synth attitude, sees the Brothers going deep into the caves of lunacy and dealing with darker issues of schizophrenia. Angel’s Eyes, the Middle-Eastern Alternate Rock with a touch of an homage to Dave Greenslade’s keyboard sounds in the midsection, keeps the album growing like a tidal wave as Down by the Sea brings a haunting view of the dystopian world of hell in a touch of Radiohead’s OK Computer-era.

And while Always Been Right has a Celtic Hard Rock edge to it with a folky crisp flavor, I Believe the final track on the album closes the album with a gospel ‘70s rock edge to it, they go far beyond the ideas in what Muse are doing right now and knowing how Prog is done and the way it’s meant to be sound for the 21st century. Stars Aligned has the Von Hertzen brothers in full circle and the adventures of their music has only got the better of it this year and seeing where the road will take them into.
Posted by znathanson at 3:10 PM