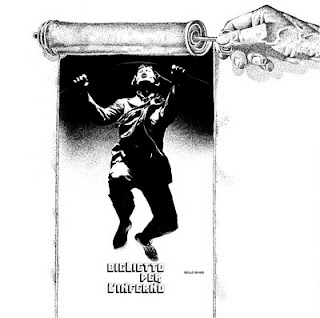 Italian Prog was home for bands like; Banco, PFM, Goblin, and il Balletto Di Bronzo. Biglietto Per L’inferno (Ticket to Hell) took their inspirations from Uriah Heep, Jethro Tull, Genesis, Gentle Giant, and Van Der Graaf Generator. But with their debut album released in 1974, they didn’t just break the door down, their music was a combination of early heavy metal and progressive rock to the core.
Formed in 1972 in Lecco, from the bands of Gee and Mako Sharks, Biglietto Per L’inferno are always remembered for their self-titeld debut album. The band considers; Claudio Canali, lead vocals and flute; Marco Mainetti, guitar; Giuseppe Baffo Banfi, keyboards; Giuseppe Cossa, piano and organ; Fausto Branchini bass guitar; and Mauro Gnecchi, drums. This album is one of a kind with the compositions helped by the keyboards and the lyrical backgrounds are emotional, explosive, and strong.
While there isn’t a mellotron on the album however, the way they played this were masters and amazingly it is unexpected that you don’t just need a mellotron, but the usage of organ, moog, and piano, makes the album work like a bat out of hell. With the opening of a symphonic Beethoven-like organ sound on Ansia, which has a lukewarm beauty at first, then it kicks in with a moog solo that is straight out of ELP’s debut album along with a flute work that makes the crossover work. Confessione, which was released as a single in Italy and as a bonus track here, this 6-minute number will definitely take your breath away.
Featuring Canali’s vocals making it from quiet to a shredding fierce of anger and betrayal while having a beautiful classical keyboard arranging along with some explosive drumming techniques done by a guitar and bass battling it out like Chris Squire and Jimmy Page, it is one hell of a track that will take you by surprise. Una Strana Regina starts off with a pastoral organ introduction, folksy and metallic early Deep Purple sounds, and the guitar licking outro that is bouncy and very dance-like to get you ready for Il Nevare. It has a blues-rock passage with a lot of heavy guitars as Canali’s lyrics deals with life and evil takes over the city as he does a David Bowie-like vocalization at the end that is one of the best moments in prog rock history.
The haunting and dramatic 14-minute finale, L’Amico Suicida, is a mourning tribute to Canali’s time in the army as he lost one of his fellow comrades by committing suicide. Canali is almost giving a service as the band plays at the funeral as he sings to his dying friend while the music becomes very explosive and again symphonic as the moog and flute work as Canali scats like a jazz fusion scientist and then the eerie finale gives it a real kick in the gut and makes you sympathize for Canali’s friend and the people serving in the Iraq War. The guitar and organ just sets the balance as it goes into a ¾ time signature like a waltz beyond the graves and then it Canali’s flute and the piano work makes it sound like a Renaissance eulogy at times, but the shrieks of the moog and the vocalizations close the album to a T.
This is a strong and influential album that cannot be missed and reflects the days of mourning, anger, and pain surrounding the band’s arranging and composition. The music of Bigletto keeps on going throughout the 21st century.
Posted by znathanson at 6:21 PM

I liked this group, I will try your albums. Thanks.