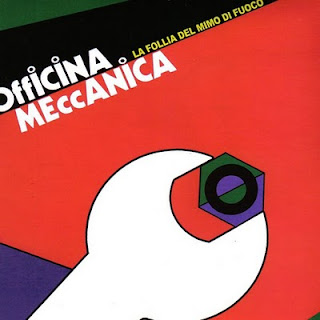 Officina Meccanica was an Italian Art Rock band that was following into the footsteps of the Peter Gabriel-era of Genesis featuring Luciano Maiozzi (Lead vocals/mime), Gianni Barbati (guitar, keyboards), Randolfo Canini (Bass guitar), Luigi Canini (trumpet), Vincenzo Bentivegna (sax), and Bruno Dionisi (drums). The band released the Bambini Innocent single, and mime performance on RAI in 1974 on TV in Italy; they were a band that was ahead of their time. Word of mouth started to spread about this group on what they were doing with their performances with theatrical backgrounds and suspenseful music they would bring to the crowd along with Luciano who could have been Gabriel’s brother who always dressed in black, with the face painting as if it was to pay tribute to Lindsay Kemp.
The group didn’t have time to record a full-length album. 35 years later, this compilation of their singles, unheard live recordings was released called, La Follia Del Mimo Di Fuoco (The Madness of the Fire Mime). They didn’t get a chance to record their debut album because Prog was about to fade away in Italy as Punk was about to explode just near a block and so they called it a day in 1978. Now with this album, you’ll find out why this band were way out there and considered the Italian version of Van Der Graaf Generator and Genesis.
Besides opening up for Banco, PFM, and Renato Zero, guitarist Barbati plays some sinister guitar work as the horn section done by Canini and Bentivegna, creates some fierce composition that is jazzy and times a tribute to VDGG’s David Jackson, and guest keyboardist Gaio Chiocchio of Pierrot Lunaire fame brings the fire with the moog and mellotron on one of their tracks while drummer Dionisi is keeping the band in tempo with his jazz-like sound as if Bruford is watching him very proudly. Luigi’s brother Randolfo is playing like a madman on the bass creating some fierce-like walking bass lines that is out of this world.
Suite Bambini Innocenti recalls a Dalek theatrical melodic mourning Mexican fanfare done meets classical guitar structures done by the horn section that is a reminiscent of Peter Hammill’s dark-like lyrics while Primo Turno sounds like at first an Italian version of Genesis Seven Stones and then becomes a fierce mad-like hard rock sound at the very end as if it was done by il Baletto Di Bronzo. The 10-minute mass madness of Via Non Esiste deals with consumerism. Here, the band goes buck-wild of the horns, bass, guitar, and drums with some ferocious jam-style notice it sounds like a carnival turned evil at the opening notes. Nel Grattacielo Delle is another jam number showing the evidence of the band’s musical background paying homage to Marcel Carne’s Children of Paradise.
Amanti Di Ieri sounds like a futuristic romantic ballad with the acoustic guitar, melodic vocals, 21st drum work, and sweet beauty to the core. Il Viaggo is a 10-minute King Crimson meets Gentle Giant workout session with time changes, high voltage guitar exercise and a few vocal arrangements it keeps the monster in the cage from getting out. The last number Angelo is very much a children’s song to the first born. It is very much the calm after the storm with it being folksy and 15th century to close the album. A shame the band never saw the light of day an offer of this compilation that is destined to be heard.
Posted by znathanson at 4:42 PM