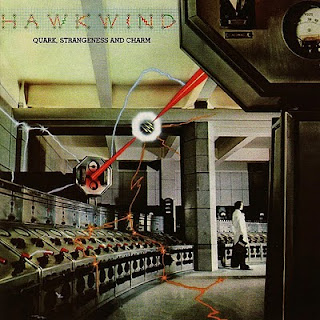 Space cadets, Hawkwind, had already achieved an underground status thanks to their previous albums on the United Artists label; In Search of Space, Doremi Fasol Latido, the double live-set of Space Ritual, Hall of the Mountain Grill, and Warrior on the Edge of Time. There is an enormous part of their legacy that had been neglected of the band’s formation since 1969. The unheard albums after being signed by Tony Stratton Smith’s Charisma label were ahead of their times.
When Mark Powell, chief of Esoteric Recordings, started a new label for the Cherry Red family, Atomhenge, it was time to go back in the spaceship and restore full speed of the post-UA label. That and the 2-CD deluxe edition set of Hawkwind’s unsung masterpiece; Quark, Strangeness, and Charm just show that there is no stop sign for them.
When the sales of their previous album, Astounding Sounds Amazing Sounds was a disappointment, they knew they had to make a comeback to the Space Rock sound, this time with a punk attitude as it was about to begin it’s wave in the U.K. and it was up to the late songwriter and members, guitarist Dave Brock and songwriter Robert Calvert to come up with a song list and lyrics that was way out of the modern world. Spirit of the Age opens up with an electronic buzz attack that would not have sounded off on the VCS3 as Calvert’s lyrical background of the 22nd century with Androids taking over the world, “Your android replica is playing up again” through a tribute to Kubrick’s Dr. Strangelove in a punk-like power punch on Damnation Alley while Robert Calvert’s anti-Einstein humor lyrical boundaries on the catchy titled track that is a rocking roller-coaster ride with “Einstein was not a handsome fellow/nobody ever called him all/he had a long moustache to pull on it was yellow/I don’t believe he ever had a girl.” Fable of a Failed Race is a wonderful post-apocalyptic ballad showing Hawkwind singing “Upon this land that once was green/is now all sand” the lyrics deals with this Utopia that once it was a beautiful place to go to, is now in ruins and chaos.
The middle-eastern violin introduction, done by Simon House for Hassan I Sabbah, is just unbelievable as it goes into the chanting done by Brock and he and Calvert go into the High Tide zealous sound something that The Stranglers could have done on Rattus Norvegicus while The Forge of Vulcan is a VCS3 adventure in the infinite in the mind of the Experimental punk duo, Suicide. Days of the Underground is a humor melody of new strangers in a new land with spacey guitar riffs and weird synths setting the background as it segues into the short and punky rhythm instrumental section of the Iron Dream.
The bonus tracks features unreleased versions of rare takes of Damnation Alley, Spirit of the Age, and a space rock 9-minute jam session in the key of A minor while the Hash Cake cut is Dave Brock’s guitar layered atmospheric sounds of the solar system. The second disc contains more of the Rockfield Studio sessions including an 11-minute version of Spirit of the Age, a rare take of the title track with Uncle Sam’s on Mars, the Motorhead-inspired sound of the 10-minute first studio version of Damnation Alley, the acoustical demo of Days of the Underground, and live versions of Robot and High Rise is worth the bargain.
Quark is weird, fast, and twisted. After the release of the album in 1977, the band was falling apart as Dave Brock and his comrade Calvert formed Hawklords releasing their only album; 25 Years On. But the re-mastered edition of Quark released on Esoteric’s new label, Atomhenge which releases the post-UA catalogue of Hawkwind’s catalogue, is probably to be one of the most unbelievable classic Hawkwind album and the band’s most cult classic. As they said in the sleevenotes; “So once again, we’ll try and get the motor’s running and take off.”
Posted by znathanson at 11:48 PM

Never thought about it. You are right. The album has a punk style.