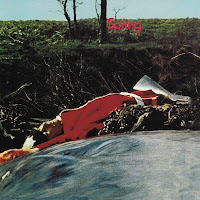 When I’ve first heard this album, I thought of the combining mix of Barclay James Harvest’s Once Again, Fire’s The Magic Shoemaker, and Genesis’ Nursery Cryme. It was new, unsung, different, and lukewarm and I was sure that this band that formed at the beginning of the golden-era in 1970 at Leicester, England had put the crossover together and made a really pretty damn good album. But I managed to buy it just for the hell of it, to realize that Spring’s only debut album, released in 1971, is one of those albums that you need to listen to from time to time by getting a real feeling to it and is a machine that just won’t shut down.
What took me by surprise about this was that they are three mellotron’s on this album. Now talk about interesting ideas because King Crimson used two of the keyboards for the Lizard album and of course Bigelf also, if you’ve seen some of the music videos they showed on YouTube. Whereas other progressive rock bands want to take their classical inspirations to gigantic stadiums, other bands wanted to go for smaller gigs with guitar solos and fantasy lyrics that are just mesmerizing, Spring’s self-titled album, is the album features them not only just a band, but interacting with a mind-boggling experience that would keep you asking for more surprises that would lay ahead for themselves.
Alongside Spring’s debut album on the NEON label, produced by Elton John’s producer, the late Gus Dudgeon, there are eight tracks including some bonuses done by reissuing label, Akrama: The Prisoner (Eight By Ten), Grail, Boats, Shipwrecked Soldier, Golden Fleece, Inside Out, Song to Absent Friends (The Island), Gazing, and the three bonus tracks, Fool’s Gold, Hendre Mews, and A Word Full of Whispers. Most of the numbers are a suite, giving Spring, a finished autobiographical storytelling beauty.
The pieces of the puzzles are here: vocalist Pat Moran brings his voice to a thing of atmospheric beauty, but there are five highlights on the album that took me by surprise.
The piano ballad, Song to Absent Friends (The Island), has that Elton John/Bernie Taupin feel as if it was left off the Goodbye Yellow Brick Road album, but it’s a fine damn tune to make you feel warm whilst The Prisoner (Eight By Ten) has the eerie quality that is very similar to Alexandre Dumas, The Man in the Iron Mask; Gazing is a tribute to BJH’s first two albums in a proto-hard rock style that features a beautiful guitar solo in which Ray Martinez does throughout the last two minutes while the drums and the mellotron fill the void to bring a thing of lukewarm progressive fairy tales; Fool’s Gold starts off with an acoustic folk ballad similar to Trader Horne but then it turns to a heavy organ background which gives Kips Brown the chance to go and give it his shot throughout the midsection as guitar and drums done by Martinez and Pique Withers duking it out to see who would win the Prog Rock golden cup, but they are definitely winners right here; and Shipwrecked Soldier, is a setting in the depths of the war in Vietnam with a pastoral rock sound ala militant march prog protest rock song that would send a shiver down your spine as Pat sings his heart out about the soldier fighting for peace, not for violence, graveyard, slaves, and mad scientists.
When the album was released in 1971, the band went on tour to support the album including opening for the Velvet Underground until they called it a day with the unreleased second album, Spring 2 in 1972. Still it’s a worth listening to if you admire the sounds of Cressida, The Moody Blues, and Beggars Opera. Interesting to take a listen to? It’s worth a shot!
Posted by znathanson at 12:55 PM