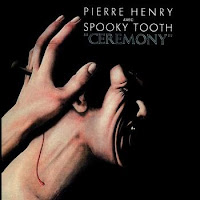 While there was no band that could have been considered progressive rock, but more with a psychedelic hard blues rock sound, more of those influences come in through the mind no other than Spooky Tooth. the music may have had a huge influence on Judas Priest who covered, Better By You, Better Than Me from their Stained Class album, The music wasn’t either bombastic with pretentious ice-skating 15th century anywhere to be sighted. Formed out of the ashes of The VIPs and Art in 1967 featuring guitarist Luther Grosvenor, keyboardist Gary Wright, bassist Andy Leigh and Greg Ridley, and drummer Mike Kellie helped to the creation to make the sound of Spooky Tooth to be the first proto heavy metal band to come out of the late ‘60s.
Alongside their first two albums, It’s All About and Spooky Two, their next album would have them put controversy on their market by collaborating with French Electronic composer of the Avant-Garde, Pierre Henry, who’s best known for his hit instrumental single Psyche Rock (later to be known as the Futurama theme), worked with them on their third album, Ceremony was released on the Island label in December 1969, is one of the strangest and twisted example of the experimental sound and disturbing choice to deal with the gothic cathedral details about Christianity to an all high stake and mixed opinions to their fans.
Ceremony starts off with the 7-minute eerie composition, Have Mercy, one of the most haunting blues rock musique concrete sounds of early Gothic Rock turned into a fierce baptism sort of Dalek mystery puzzle solving with a heavy guitar solo and rumbling synths that seemed was coming straight from the mind of John Lennon’s Plastic Ono Band and the Beatles White Album sessions. Jubilation is a the layers of hell of fucked-up chants setting with Mike Harrison’s lukewarm vocals as Gary Wright’s keyboard and Pierre sets the post-apocalyptic nuclear holocaust of Religion from the minds of believing in Jesus Christ as if Edgard Varese was rolling in his own grave; Confession is an early homage to the Krautrock scene ala Faust style starting off with a droning noise, guitars layered, and hammers banging very loudly whilst becoming funk hard rock midsection as Pierre fly’s off the motherfucking wall with his synths that at first you think that it’s fucked up bullshit in what he’s doing, but Holy Fucking Shit! He’s having the crucifixions a ball and nailing it big time like a motherfucker! The 10-minute sinister classical ambient mystery of Prayer is a tribute to Tangerine Dream’s Electronic Meditation and Amon Duul II’s Phallus Dei; Offering is an erotic heavy dreamland to salvation as if it was recorded in 1979 to give it the supernatural duty calls of chills down your spine; and the final sixth track, the 7-minute hell on bible gods, Hosanna, a worship to the lord our savior atmospheric metallic wonder that makes the band as disturbing monks.
Throughout the piece, you get to hear Mike Harrison’s true side from a calm and screaming vocal arrangement while Luther Grosvenor’s guitar work brings it to disturbing and shrieking rhythm section and solos that would fly off the wall as Pierre Henry is doing some mad scientific experiments to cook up the Moog’s and the VCS3 as if the people supporting the god are entering the Jerusalem Church at the right time to jam nonstop. You get the idea Spooky Tooth showed some weird concepts turning from hard rock into a darker Christ-like figure into paradise itself. Though they split in 1974 and reforming again in the 21st century, this album might scare the living shit out of you if you're up for the challenge to play it along with Frank Zappa's Freak Out! album and Captain Beefheart's weird adventures of Trout Mask Replica.
Posted by znathanson at 11:10 PM