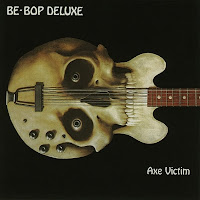 Founded in Yorkshire in 1972, Be Bop Deluxe was the combining mix of Roxy Music, David Bowie, Sparks, and Peter Hammill. They came together to as a blues rock band to follow in the footsteps of John Mayall, The Yardbirds, and Cream. But when Glam Rock was in its peak, front man and mastermind of Be Bop Deluxe, Bill Nelson knew where the direction that he and the band were going for. Even though they weren’t trying to copy Ziggy Stardust and the Spiders from Mars, Bill also admired the Art Rock scene that was going on also with; Pink Floyd, Van Der Graaf Generator, King Crimson and the avant-garde of mad music, Frank Zappa. A couple of years earlier the late John Peel was so impressed of what Bill Nelson with the release of his first solo album, Northern Dream, released in 1971, that he urged Harvest Records to get a glimpse of the upcoming singer-songwriter. Harvest may have been glued to Kevin Ayers, Edgar Broughton Band, Deep Purple, and Triumvirat, but they had no idea of what was about to happen next.
But it all worked and the release of Be Bop Deluxe’s debut album, Axe Victim, released in 1974, showcased their Science-Fiction rock stories, jazz guitar works, paying homage to the important Glam Rock bands, and the psychedelic folk rock sound of the late ‘60s in Great Britain.
The lead single, Jet Silver and the Dolls of Venus, almost could have been a prequel to Mott the Hoople’s All the Young Dudes and David Bowie’s The Supermen, is a lukewarm distinct melody with a component acoustic crisp sound along with the chorus that seems dream-land but astonishing for Bill to sing about a band from outer space to give the earthlings a concert they’ll never forget.
Even though Bill Nelson is the brainchild of BBP, his guitar work would bring the experimental sound with a solo in the midsection that would raise a hair and shiver down your spine while other musicians including Rhythm guitarist Ian Parkin, Bassist Robert Bryan, and drummer Nicholas Chatterton-Drew are established musicians. With an amazing line-up to be on the Be Bop Deluxe cruise line, the band was always looking to hit the mainstream. But Axe Victim shows the Be Bop Deluxe at their beginnings to go commercial. Alongside Jet Silver, there are some amazing songs that it’s sending a light shining through the audience.
The soaring opening title track, has the stop and go time signature in ¾ with a sonic guitar work that makes the band from just a club band to being Roxy Music’s kid brother as Bill sings the opening line ‘You came to watch the band/To see us play our parts/We hoped you’d lend an ear/You hoped we’d dress like tarts.’ Dealing with Teen Girls going apeshit over the Glam gods and making it so fucking mesmerizing, it’s one hell of a song while Love Makes Swift Arrows is an acoustic proto-punk rock that made Nelson’s guitar work as it could have been a hit single ala Bowie-style. Third Floor Heaven and Night Creatures pay tribute to Slade’s heavy rock and ballad rock sound as for Rocket Cathedrals is a crazy crossover of Robert Calvert and Elton John ala pounding rock style;
Adventures in a Yorkshire Landscape is another folk acoustic turned heavy sci-fi haunting rock beauty as the 7-minute composition Jets At Dawn is another guitar layered sound tribute to Sparks’ Kimono My House while the final two numbers the glam-esque sound of No Trains to Heaven and the piano balladry, Darkness (L’immoraliste), brings the album to a close.
Though the band called it a day, the reissues just released years ago to delight a new generation of fans to understand why Be Bop Deluxe were completely ahead of their time and looking at their catalogue and seeing the amazing sounds of the band and Bill Nelson.
Posted by znathanson at 7:45 PM