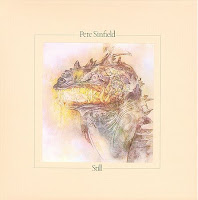 It’s hard to talk about that in the history of Progressive Rock about Peter Sinfield, who’s lyrical backgrounds helped paved the wave for King Crimson to help write the songs to give it a Tolkien and Fantasy background that he gave to bring to the forefront. Even though alongside King Crimson was the first band to bring prog rock in a firestorm, Pete Sinfield’s concept showed a lot of brilliant backgrounds in songwriting in which Donovan became his biggest influence to write lyrics based on his love of books and very science-fiction in an apocalyptic view of hell with; ‘The wall on which/the prophets wrote is cracking/at the steams.’ It sounds very beautiful to come up with lyrics like that from his days with working with guitarist Robert Fripp to leaving the band after the release of Islands to pursue a solo career. In 1972, he worked with Roxy Music by making their landmark glam-prog self-titled debut album whilst he got to work Crimson member, Greg Lake with the first prog rock supergroup, ELP on the glorified Brain Salad Surgery of the 32-minute sci-fi epic, Karn Evil 9 and of course with Italian prog kings, Premiata Forneria Marconi by writing English versions of their songs on the first English albums. But what most people don’t know that he also released one of his first solo album, Still is an album that you need to listen to and any fan can definitely relate the lyrical techniques you have to listen to for the first time to get into the hang of it, but give it a few shots and you’ll see why he’s one magnificent lyricist. Mind you, you don’t see him as a Prog’s answer to Leonard Cohen.
Now in an Expanded 2-CD edition set done by Esoteric Recordings which are working on bringing the Manticore label to prog fans to the core, featuring early sessions in 1973 and 1975 including two bonus tracks; the country folk sliding guitar ballad, Hanging Fire and the King Crimson style of the love song beauty, Can You Forgive A Fool? that weren’t release on the time when Still first came out, It’s one of the best re-masters that I’ve got a pleasure to take a listen to. Mixing with Pastoral Symphonic Beatlesuqe freedom, Sinfield didn’t make any excuses of his background with King Crimson, yet the songs are magnificent. Along with Envelopes of Yesterday, which has a very 15th century George Harrison related guitar work ala Canterbury style to Caravan’s first album, the opening introduction Song of the Sea Goat could have been too hard to be put on Genesis Trespass album which seemed very English cottage-like with an eerie ballad that has piano, flute adding to the scenery as if Peter Gabriel had more of the compositions for his story-telling complex songs, The Piper is an homage to Fairport Convention along with A House of Hopes and Dreams which has a lullaby psychedelic dreamland for children to sleep and go beyond the clouded white horses flying through the sunless sky; Under the Sky which was covered earlier with Judy Dyble featuring Giles Giles & Fripp on the Brondesbury Tape sessions, has a Canterbury version of Tangerine Dream jazz fusion style whereas Will it Be You and Wholefood Boogie is a down on country blues style, where Sinfield finds it fun to sing to come up this quirky bumpy song; While Greg Lake makes a surprise duet with the atmospheric composition of the title-track, the closing number, The Night People has a Weather Report meets Pink Floyd funkadelic style.
Still is not a masterpiece, nor Sinfield can sing also, but again the prog version of Leonard Cohen, but there are definite surprises to view the moments of the momentum to brightened up your nice cup of English Tea and Biscuits and the mastermind could have been okay as a singer, but I definitely prefer him writing lyrics rather than singing and going on tour to promote the album. It’s worth listening to if you love Peter Sinfield.
Posted by znathanson at 11:24 PM