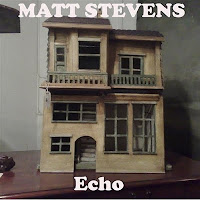 When I’ve first heard this album, I was a little skeptical at first, but hearing for the first time from start to finish, I knew that this wasn’t just a debut album, this here, is one magnificent instrumental album. Mixing with the guitar sounds of Robert Fripp, Ottmar Liebert, Omar-Rodriguez Lopez, John McLaughlin, and Alex Lifeson, newcomer from North London, Matt Stevens is one of the heart stopping guitar players to come out of England. He has already performed in the U.K. and has received word of mouth and created a huge buzz along with his debut album released in 2008, Echo in which he uses a lot of multilayered tracks for his trusty acoustic guitar to give it an eerie and haunting sound in which he would give according to him on his biography, “Live Looping”.
Matt plays his guitar as if he was onstage with his heroes with King Crimson and Frank Zappa as if they recorded together in a cavernous cave; the opening number, Moon Dial begins with a finger picking guitar work along with a haunting chiming section that fits well with the Matt’s composition – has guitar music been so damn good to feature a section like that with a magnificent force in instrumental music for the 21st century? Hell yes! – The drums and the strumming fit in the atmosphere to give it a Radiohead passage to lead into the haunting finale.
Two dramatic numbers, the soaring Spanish Guitar sound with Burning Bandstands and the homage to the Dave Matthews Band meets Rush sound of the chugging pounding styles of Airships, both of them sounded like as if they were recorded in the streets of New York City as the people hear the constructors working 24 hours day and night to finish the job for a new building and making it look fresh and much better for the Big Apple to enjoy, while Drama in the Coals explores the Indian and African tribe in a heavy setting as the guitar becomes calm for a moment as his guitar all of a sudden becomes a train going into the jungle with a lot of heavy strumming and the solos become very jazz-orientated. Flies in the Basement, pays tribute to the West Coast sound of the psychedelic ‘60s with a Jerry Garcia touch on the guitar with a lot of loop changes that he does, but it’s definitely worth a Golden ticket to hear. Emerging with a Hackett-like solo and a Malaguena sound that is a thunderstorm that would have made Robert Fripp taken aback by, you begin to wonder is Matt Stevens is going to win the world cup series.
The last six tracks are a thrill ride paying homage to the Progressive Rock sound and the guitarists that Matt Stevens admires. Snow (Part 3) is an ambient David Gilmour sound similar to Pink Floyd’s last album, The Division Bell with the instrumental, Marooned, which almost has a ballad-like quality; Chasing the Sun represents an acoustic version of the Ventures surfing guitar rock sound and Omar Rodriguez-Lopez salsa guitar rhythm as if they had mated together with a lot of heavy recording sessions; while Spencer Park comes in with more of the 15th century Renaissance sound as if it was recorded in India with a spectacular upbeat tempo to make it more sound like if Thom Yorke recorded this during the Eraser sessions, West Green has an Spain stop and go sound tribute that has the Ottmar Liebert meets Jonny Greenwood influence and could have been a part of the indie film, Y Tu Mama Tambien; Jubilee is a ghost-like breathtaking emotional beauty arrangement as for the closing number, Doll’s House mixes with techno acoustic rock to dark-like stories that is very sinister worthy of the OK Computer-era of Radiohead.
The tracks, the arranging and composition’s that Matt does is mesmerizing to get your hands on to. With Echo, you can do no wrong to bring the house down. A nice covert art and heavy acoustic work? Not a bad idea.
Posted by znathanson at 9:09 PM

Thanks loads for the review mate - much appreciated.

Thanks so much man

My pleasure. I can't wait to hear your new album!