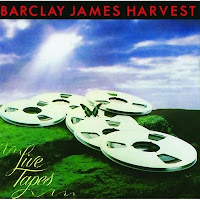 By now, you may have to embrace the sound of Barclay James Harvest who have to appear into a dreamland fantasy-like story for they bring to the Prog Rock underground table. But this is definitely a good thing for a strange band that some of the unheard bands from the seventies should be checking out by not destroying their records, so this is a great thing with the quartet from the minds of keyboardist Wooly Wolstenholme; bassist Les Holroyd; guitarist and vocalist John Lees; and the late great drummer Mel Pritchard, these men work together as a team to play inside an English countryside of pastoral ballad beauty of progressive rock. Live Tapes, released in 1978 which was after their 1974 first Live album simply called, Live, the band were signed to a new record label after leaving Harvest and moving to Polydor Records to promote Gone To Earth. It featured some of the songs from the album – including a journalist who described Barclay James Harvest’s music as a “Poor Man’s Moody Blues”.
So what John Lees did in response to the journalist, was to write a song that could have been a sequel to Nights in White Satin which could have made John Lees a kid brother to Justin Hayward and John Lodge in a weird and interesting way. On this 2-CD set helped by the people at Esoteric Recordings, the band was more of an independent symphonic band that had a tour de force here on Live Tapes rather than Yes’s Close to the Edge. Woolly’s keyboard playing has an impressive scope from a diatonic constant pastoral success, John’s vocals shines throughout the live sound with his Steve Howe guitar work as Les Holroyd’s bass playing is very calm and Mel’s drumming brings the band going for the fans to see the magnitude on Barclay James Harvest.
Originally, the album was supposed to be released in the United States, According to the liner notes done by Keith and Monika Domone, the Live Tapes had been recorded to see if America was ready for Barclay James Harvest, but the track-listing had to be changed. It fell through because Europe was a perfect market to release Live Tapes with some astonishing tracks that would definitely get BJH’s attention to perform in America at Prog Rock festivals. But Live Tapes definitely offers an amazing set list that is almost a two-part act of an independent rock musical story into space.
Beginning with the Space Ambient Rock introduction with Child of the Universe, it includes surpassing excellence live versions of the symphonic bonus 6-minute track, The World Goes On, Pastoral Mellotron beauty with a dazzingly live version of the fan favorite, Mockingbird while they pay tribute to Pink Floyd with Hard Hearted Woman and the atmospheric impressive ballad Poor Man’s Moody Blues and Rock & Roll Star. But it gets more of a heavy ride, the neo-classical live touching power of the 11-minute haunting version of Medicine Man sends a chill down your spine remembrance of Hawkwind. The second disc showed their emotional balladry with Taking Me Higher, Suicide?, the hard turned 14th century rocker, Crazy City and the Starcastle clone take of Polk Street Rag.
When the album first came out in June of 1978, Fans from the UK felt that a double live album, was showing Barclay James Harvest pushing too much commerciality and hitting the mainstream too much. Sadly, the album didn’t sell well in the UK, but it was a huge success in Germany reaching the top 20. A Live album that was ahead of it’s time, is finally given the chance it deserves to get.
Posted by znathanson at 10:16 PM