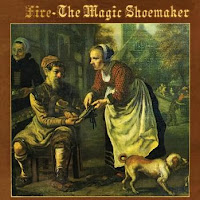 Before Strawbs, Dave Lambert’s psychedelic band Fire is only known for their garage rock fuzz tone hit single, Father’s Name is Dad, but there was something inside this band when they released this lost concept album. The Magic Shoemaker released on the PYE label in 1970, now reissued from the Esoteric label rather than the earlier re-mastered Castle label a couple of years ago. The album features new liner notes about the making of the album including the story line done by Ray Hammond, this album is a slice of progressive psychedelic apple pie, featuring heavy guitar sounds, bass, and drums along with some folksy crisp along with Lambert’s narration telling to a young group of children about the shoemaker’s story which seems very 15th century, but it works.
Lukewarm, Hippie Power, and very English it may be, but the early sound of progressive rock that would make the fans very appreciated of Lambert’s soaring vocals before becoming a Prog-Folk singer and began to realize how damn good his arrangements really are from start to finish. Whilst Dave’s voice is top supreme, his guitar sound just gives you goosebumps alongside Bob Voice’s shattering drumming brings the Fire sound to the table as for Dick Dufall’s bass work which is similar to Noel Redding of the Jimi Hendrix Experience and Fat Mattress. This is definitely a must-have collector’s item of the music and story that gives the complex story-line the treatment of giving force of the recording sessions to give Lambert the power not to make another Fire album.
Even though The Magic Shoemaker is really worth listening to, there was an act of principles surprisingly of the band five highlights of the conceptual story. The blues-hard rock shuffle Like to Help You If I Can mixed heavy guitar solos similar to the Yardbirds guitarist Jeff Beck and Jimmy Page, jazzy opening bass line, political helpings to the Shoemaker from the King to make him fly which would stop the battle. Yet the early sound of lukewarm haunting piano balladry turned psychedelic folk pop of the treasure hunt was Shoemaker, which, with Lambert’s vocals reminded me of Spooky Tooth’s Mike Harrison; More of the their earlier days of the Nuggets garage rock sound of the late ‘60s I Can See The Sky, featuring the band doing a small tribute to The Who and the Small Faces; The ragtime tongue harmonica quirky sense of humor ending Happy Man Am I is a short little ditty that makes you smile as if they recorded the number inside a cabin to make fun of themselves while working on material for the Shoemaker sessions;
And if that wasn’t enough, the 6-minute introduction mixed with an heavy African-tribe psychedelia-sound, Tell You a Story, Lambert’s fiery vocal introduction and sneering guitar work that would have made the Doors and the West Coast Sound of California taken aback by while the four bonus tracks on this reissue, are worth to take a listen to.
You have the proto-punk power pop ‘60s taste of Father’s Name Was Dad, Treacle Toffee World is their tribute to the Syd Barrett-era of Pink Floyd while ‘Round the Gum Tree is another quirky number as if Dave Lambert had teamed up with an English version Alvin & The Chipmunks to record this comedic little ditty as if they were paying an homage to The Move’s Here We Go ‘Round the Lemon Tree. And Toothie Ruthie showed their earlier touch of Bubblegum music as if they were trying to be the Monkees and the Archies, but thank god they didn’t. After the Magic Shoemaker was released, the band called it a day before reuniting to perform the album in its full glory in 2007 for a live version. Still, a band and an album to really check out before listening to the Strawbs.
Posted by znathanson at 9:28 PM