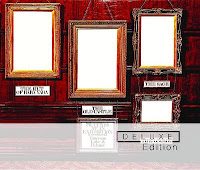 One of the most bombastic Prog Rock groups that would put the genre on the map of all of concept and mind-boggling suites was Keith Emerson, Greg Lake, and Carl Palmer.
Throughout the golden-era of the early ‘70s, ELP’s music have become the masters of the Prog Rock genre with a huge sub-conscious feeling; A roaring dinosaur of huge bombastic concepts and flying pianos going up and down while the musical touch of classical meets heavy duty moog’s, makes the genre feel pretty damn good and more considered unrelated to any genre of music. That and the 2-CD deluxe edition reissue of Pictures at an Exhibition is one of the best and their masterpiece of taking a piece of Mussorgsky’s suite into a powerful statement. This trio did something that was completely out of the blue and ahead of their time. In using Keyboards, Bass Guitar, and Drums, screeching insanity out of nowhere from Emerson’s synths while Lake does some folky ballad on his acoustic guitar on The Sage and Palmer drums like Keith Moon meets Buddy Rich, as they played together as a team and showed musicians how they play like crazy and doing a technique that you would make you say ‘wow!’ in the world of experimental music. If the 19th century had a rock band in Italy playing about 20-minutes of Amadeus, it would be these guys breaking the wall down in an explosive heat of destruction.
What is surprisingly good when you listen to this crazy idea but beautiful music from the Free Trade Hall, Isle of Wight, and the soundtrack to the Lyceum performance in the early ‘70s on how extreme of its origins and importance it may look like a newborn baby. Looks like that Modeste Mussorgsky was rolling over his grave of his suite to be played by almost a prog version of the Jimi Hendrix Experience while they pay an homage to him on Pictures at an Exhibition, but you get the feeling that you are in the audience of the three-piece echoing the classical music taste that wasn’t a waste of time, but more of a magnificent magnum opus. Almost you can get the feeling that listening to it that they were almost tap dancing to Kim Fowley’s take of Tchaikovsky’s Nutcracker taste of Nutrocker in a rag time way while going sinister of The Hut of Baba Yaga, The Gnome, and The Old Castle. And hearing Emerson going pre-Wakeman on the keyboards and acting like Leopold Stokowski to Lake and Palmer to give them the right moment at the right key signature of dynamic proportions.
Each and every part of the deluxe edition quality of Pictures, remains a magnificent mastermind of the performances they give and how they would give it a thumbs up as they wowed the audience with their sound and the way they were having a grand old time to please them and enjoy their money’s worth. No wonder the music sounded good and going to the top of the mountains to play like crazy.
Posted by znathanson at 11:36 PM