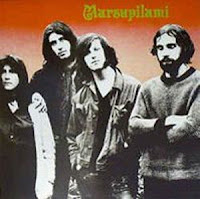 If you’re interested in the gloomy side of prog rock, this is it! With the style of Edgar Allen Poe like lyrics and darker compositions – alongside screeching guitars and Transylvanian-style of the Hammond organs that came out of a horror film from the early ‘70s – this was an album that meant to scare the shit out of listeners. All of a sudden you get the feeling that the genre can be a nightmarish post-apocalyptic view of Earth than your typical boy-band bullshit. It was the future of hell. Taken their name from a Belgian cartoon comic strip by Andre Franquin, Marsupilami were one of the short-lived bands to come out of the independent music scene of the early ‘70s to make you jump and their arrangements and the key signatures would bounce like a Bat searching for its prey. On their self-titled debut album, the dark clouds combined the forces of hell.
The opening Dorian Deep could have been written for an alternate rock opera version of Edgar Allen Poe’s The Fall of the House of the Usher or Joan of Arc (maybe one of the Hasson brothers read a lot of books, then a bit of classical music) but the piece works like a charm into a proto-heavy metal guitar work that fits the project very well and some African relative music. Born to Be Free introduces some straight-forward guitar finger picking techniques, walking bass lines, wild flute solos from Jessica Stanley-Clarke, and medieval lyrics to the core, almost an homage to Jethro Tull. Fred and Leary Hasson also had a reputation to come up with some huge titles for a piece that ranked for 10-minutes that seemed strange and impossible, but worked very well. Take for example, And the Eagle Chased the Dove to its Ruin (almost sounds like a cross between Argento meets Romero, zombie style of avant-garde music!) it starts off as an operatic suite that Black Widow wished they could have written for Richard Wagner’s Rheingold and then it becomes a heavy duty spectacular statement. For listeners who admire the 23-minute suites of bombastic proportion, though, get a real kick out of the supernatural fairy tales that most prog rockers would do, take a strange approach of presaging trouble.
The 10-minute instrumental Ab Initio Ad Finem (The Opera), starts off as a children’s lullaby music for babies to go to sleep to and then the sound of the wind and vultures comes in to search for dead corpses while the Hammond organ comes in that rises from the grave as a church like arrangement and becoming more weirder by the minute as the music with the guitar, bass, flute, and drums come in almost like a showdown into the depths of the apocalypse of a machine that declares war in the entire city that is a reminiscent of introducing early Gothic Prog as if the Canterbury prog-trio Egg meets Genesis meets King Crimson’s Larks Tongues In Aspic in a conceptual album way, while the final track handles to pass the torch to the 9-minute almost mellotronic of an evil version of the Moody Blues with Facilis Descencus Averni, a magnificent jazz fusion meets symphonic hell sounds of Frank Zappa.
Even though the group disappeared after the release of their second album, Arena, this was a great start and nothing that was godawful or damned by the press. Like a soundtrack to a Disney movie that had gone horribly wrong, it was like the music had given a new life.
Posted by znathanson at 2:17 PM