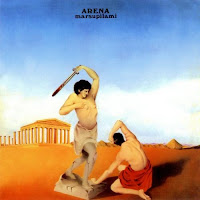 Adding the brothers Fred and Leary Hasson, Mike Fourarce, Richard Hicks, Dave Laverock, and Jessica Stanley-Clarke, alongside rare progressive rock bands Aphrodite’s Child, Marsupilami is one of the strangest bands to come out of the UK from the early ‘70s. Formed in the late ‘60s, they took their name from a french comic book by Andre Franquin, signed with the Transatlantic label and now re-released this lost concept album in the gore fests of the battle fields of Rome in 1971. It was almost that could have been a movie for an alternate soundtrack to Stanley Kubrick’s 1960 classic, Spartacus.
With a blend of dark and sinister sounds of the guitar, keyboards, bass, and drums of the mystery on Arena, one of the weirdest situations that ever came about on their last and second album. Produced by the late keyboardist from Camel, Peter Bardens, who was about to ride with Andy Latimer on their self-titled debut album, in a cross between King Crimson meets Julian’s Treatment meets Genesis.
Marsupilami represented to be the Progressive Rock brothers of Black Sabbath that was evil, jazz, funeral settings, and dual one-on-one to rip their eyes out with sheering guitar licks and heavy drum work (Prelude to the Arena). But even though they had their proto-metal sounds similar to Blossom Toes, Marsupilami doesn’t make any goddamn excuses or pretend to be a bunch of alcoholic metal gods. They still have managed to pull some strings to grab you’re attention while you listen to this with a 10-minute epic in the colossus of death (The Arena), an homage to an acoustic folk music that has gone horribly wrong in a post-apocalyptic scenery with flute, organs, and horns while the drums sets the tone into a hellish nightmare that you couldn’t get out of with a harmonica setting the epilogue of the grizzly deaths of the Arena (Spring), bursts of jazz fusion Mahavishnu style of Van Der Graaf Generator (Peace of Rome), and the opening line of ‘Shout to kill/Goes on for days/a million deaths/a million ways/to start the living moments of the death’ almost the aftermath of the arena of the bloodbath between human vs. human and human vs. giant animal as it delivers a melodic mourning statement of what happens outside of the ring (Time Shadows).
In my humble opinion, I think the Transatlantic label were quite shocked when the group gave it to them on their desk and saying ‘this is our product. do something with this!’ it was almost as if the Gods were rolling in their graves thinking ‘what the fuck was that about?!’ but all in all, this remains a classic lost treasure from the Esoteric label who still keeps the genre of Progressive and Psychedelic music flowing and growing at the same time to make you go for something that is completely out of the blue. Rome’s historic landmark in Pompeii as a blood fest Rock Opera? Not a bad idea.
Posted by znathanson at 1:58 PM