Genesis - Selling England By The Pound 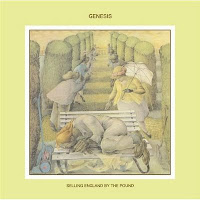 This was the album that meant a lot for me when I was in high school in my freshman year. It was the year 2000; my family went to New Orleans (pre-Hurricane Katrina) to visit my sister for Yom Kippur in October. It was a cold and freezing day. After we left synagogue, we headed back to the Hotel, got dressed in our casual clothes and headed to the Virgin Record Store. I was completely amazed of what I saw. The CDs I wanted to buy with my pocket money and spend a fortune on all of them. One of them was the Rock section. I looked up the name Genesis and I bought three albums from them; Nursery Cryme, Trespass, and Selling England By The Pound. It was the Peter Gabriel-era of Genesis that meant the world and I knew that I was about to go into more of the waters of Progressive Rock. I was discovering a lot of discoveries of Prog besides Pink Floyd. Bands like; ELP, Yes, Rush, VDGG, and of course Genesis. Never mind the Phil Collins bullshit, here’s the real sound of Genesis of Peter Gabriel and Steve Hackett.
When I first heard it in its entirety, I was completely blown away by the production, Gabriel’s lyrics about England’s downfall, and of course the wondrous magic of how Genesis was so amazing between each other.
The album begins with Dancing with the Moonlit Knight which starts off with Gabriel singing alone for 15 seconds and then it becomes a moving groove of epic proportions with its medieval beauty while Hackett and Banks compete in a driving force between Guitar and Keyboards. I Know What I Like (In Your Wardrobe) which was their hit single in the British and American charts at no. 17, has a comedic rock beatlesque tempo quality to it almost as if Genesis were becoming more of an homage to the Livepuddlians in a sort of a John Lennon fashion by mowing the lawn and daydreaming to become the biggest star in the world. The 9-minute suite, Firth of Fifth is the centerpiece of Prog Rock suites. It begins with Tony Banks classical piano introduction for 1 minute and 32 seconds and then it becomes a Christian Rock sound as Peter sings about the Shepherd living inside the fence and the five rivers flowing inside the mouth of his madrigal. And then in the midsection, Steve Hackett takes over doing his virtuoso solo on the guitar and delivering a magical statement while More Fool Me becomes more of an eclectic acoustic ballad from Phil Collins. The 11-minute story Battle of Epping Forest which almost has a TS Eliot meets King Arthur edge to it which almost reminds of this crossover between Ragtime music going Yes on your ass. After the Ordeal is Steve Hackett’s genuine opus just him on acoustic guitar as it goes from Folk and Classical while The Cinema Show has an erotic Greek-like tale of Romeo and Juliet making sweet love before heading off to the movie theater for a couple of chocolates and drinks as the band do a swirling improvisation. Aisle of Plenty is actually a sequel from the opening number and then it becomes a pre-shopping list of scrambled eggs.
All in all, this one of the most hands-down best album from the music of Genesis that redefined their sound and more of their turning point and moving away from their underground status to a little bit more mainstream. Selling England is a classic and you need to buy it. And they know what they like in their wardrobe.
Posted by znathanson at 11:22 PM