Times Up - Sea of Schemes 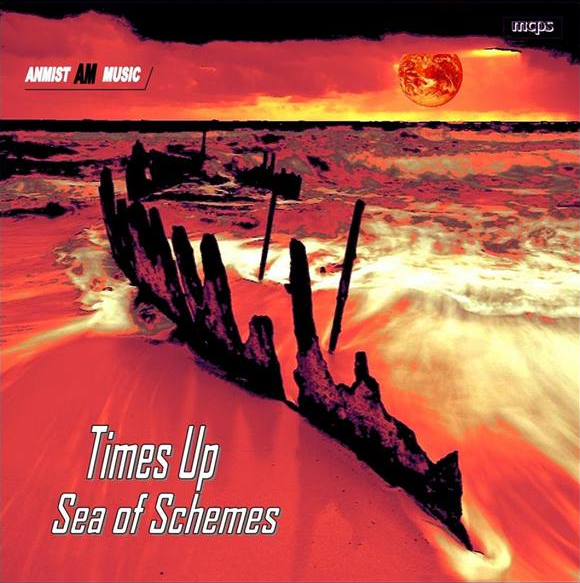 It’s hard to do a follow-up album and making a departure of a band that have been known to stay true to their music and deciding to go in a different direction. And it’s very much what is going to happen next and how must they have no choice but to go to that area and dividing a line in the sand for the fans to accept the new sound or not. And it will have a huge impact on a band's career. Its needs a lot of ideas, creation, and innovation as well. And for Times Up, it gives them a chance to go back on the Yellow Brick Road again with their follow up to 2012’s Snow Queen on their third album, Sea of Schemes.

There are some symphonic, electronic, harder moments, and atmospheric pieces that Times Up brought on their continuation. The ambient-moody opener, Chasing Ghosts, begins with almost an instrument going through an ARP 2600 before the guitar goes into a cleaner mode as Linda Barnes come in as if she's doing a sermon to say farewell to a friend, but not sense the idea of “rest in peace” in their mind. And then after her vocals, the synths and guitar gel together as the keyboard creates these swooshing sounds and ‘80s vibe for their adventure to begin as the guitar from Mike Hagland creates a visual yet mysterious vibration.

Meat on Bone is a walking guitar and banjo line along with the snapping fingers sound that almost is a reminiscent of Peter Gabriel’s first solo album for the first two minutes before the landing into another dimension comes kicking in as the synth and sliding guitar is in full swing with the orchestral string section vibes for a brief second. It’s almost like an epic film score as the instruments are combined into one as if it has a dramatic vibe and not to mention the harder edges flown in from the guitar riffs with different signatures that go harder, classical, and harder.

It is a wonderful combination on the four movements that go through walking line, extreme turned classical, soothing, and then back into the preparation for everything to change at the exact moment for a wonderful finale between guitar and synth creating emotional melodies along with the stomping drums and piano chords before fading off into the sunset. When Kings Fall sees Times Up going into a brave and daring adventure into an exuberant composition with a haunting introduction as it shifts from the heartbeat and melodic boundary before heading into space between drums, guitar and keyboards as the vocals comes right in and everything fits throughout with a Yes vibe thrown in.

You begin to wonder if Times Up are really up to something by making magic throughout the suites and the brainstorming ideas have come inside their heads, but the last three compositions, are just worth the adventure to come to an end. Snakes and Ladders begins with a Morse Code introduction before Lawton’s minor piano works and Hagland’s spacey and intense guitar and haunting banjo work comes flying in for light speed as Andy Gibbon helps out on the rhythm of the beat while Steve Leman gets into the improve as Richard Lawton creates this jazz vibe on his sax that reminisces David Jackson (VDGG), and bits of Dick Parry thrown in there.

The 8-minute title track at first begins with an Electric Light Orchestra vibe with the Jeff Lynne-sque sound for the first 50-seconds before setting the controls between organ, drums, and guitar that provides a lead-in as it heads into the mellowing acoustic rock crisp from Linda as the last 2-minutes becomes a dystopian percussion-ambient featuring whispering spoken fading vocals by Bob Teague saying “Welcome to Corruption,” about five times. The closer, Let the North Wind Blow, is the journey’s end, dulcet turned thunderous string sections, enthralling guitars, keyboards, and bass, makes it go back into the epic score again to ride off into the sunset.


This is my 4th time listening to Times Up new album and I have to say that I’m really impressed from what I’m hearing of their establishment and perception that contains a lot of something emotional and it shows the power and beauty that you can bring in with your strength and Times Up have for me, succeeded and delivered very well with the Sea of Schemes.
Posted by znathanson at 9:44 PM