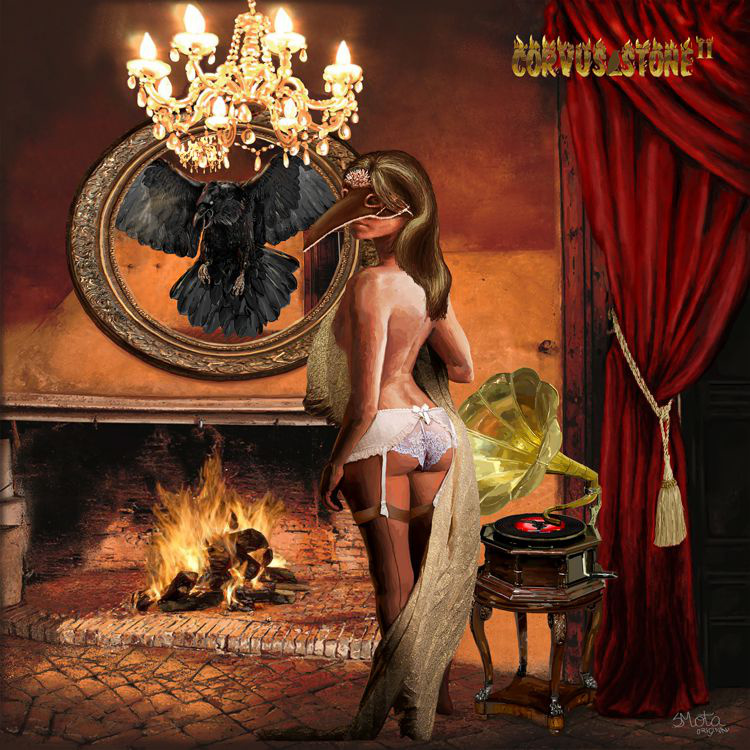 Corvus Stone are always trying to bring new ideas to the table. They have these brainstorming concepts for each of the members to come to the table with since their debut album back in 2012. And now with the follow up album released on the Melodic Revolution Records label this year, it proves that they can take the concepts and the ideas, into unbelievable results by creating and helping out on 15 compositions that clock for 80 minutes to embark on another journey into the world and journey to experience.

Alongside Colin Tench’s guitar playing, keyboardist Pasi Koivu, Petri Lemmy Lindstrom on Bass, Robert Woff on Drums and Blake Carpenter (The Minstrel’s Ghost) on vocals,  they brought along guest vocalists including Phil Naro (Druckfarben), Stef Flaming (Murky Red), Andres Guazzelli, Timo Rautiainen, German Vergara (Aisles) and Sean Filkins (Big Big Train). It’s almost very much like team work on which songs they have to sing and taking turns on which part of the harmonies they have to be at right moment at the right time and they have done a superb job taking different types of the variations of music whenever they would bring it to.

Pieces like the ¾ waltz time signature featuring a church organ, Tench’s swirling guitar solo, and Robert’s drumming setting the uplifting moments on Early Morning Call, gives it a haunting and moving dance that has a moment for the sun to come up at the right moment for dawn to break as Purple Stone in which it is a tribute to the music of Deep Purple, sees Blake Carpenter going into the styles of Rob Halford and Kevin Heybourne.

Opener, The Simple Life, in which its sung by Phil Naro, features harpischord and guitar playing into this moody piece before going into a lukewarm wake-up to say good morning to everyone that starts the album off for the sun to rise on a beautiful day to start a new chapter. Then Corvus Stone goes into some different variation. You have the sound of the futuristic voyages and the sound of Gilmour and at times, the Canterbury group, Khan. You can tell that Colin and Pasi are creating these soothing symphonic structures of the Floyd on Boots for Hire while they get into the sense of humor in the styles of Salsa and in the mood for a dance to get the congas ready with Scandinavians in Mexico.

But they get into the groove of Jazz, Fusion, and Blues combined into one as Colin, Robert, Petri, and Pasi’s wah-wah keyboard, gives each of the four to take turns in improvising and creating their own beat and tempo on Uncle Schunkle. The mourning, Camelus Bactrianus (Tuolla Tuonnempana) , features a funeral drum march, dooming organ, bells, and Timo Rautianen just nailing each note on the vocals before getting into the emotional pieces that fit perfectly on this track. But it’s the 14-minute epic, Moaning Lisa, that at times feel like a story.

The first five minutes and twenty-seven seconds of the piece, reminded me of Jim Croce’s Time in a Bottle and elements of Nick Drake’s Five Leaves Left-era thrown in to give it a mourning acid folk resemblance in there with a Renaissance-Symphonic waltz figure thrown in there by doing the step 1-2-3 dance along with the clapping rhythm section not to mention Colin’s guitar roaring on the different lead section and the harmonica blaring thanks to the intense drumming to give it a vibration. And then it goes into a soothing Brazilian bossa-nova with a jazz-classical twist to it before it segues in an ambient/atmospheric move as Petri comes in with his bass touch as the band go into the dancing waltz again to close off the last 2 minutes of the piece.


For 80 minutes, this is a wonderful follow up that Corvus Stone have brought here for 2014. So far, I have listened to this about three times now and I’m completely blown away of the improvisation, humor, story-telling pieces, and it is a great adventure for them to bring something special by creating magic and not to mention the artwork that Sonia Mota has done. I’ve always wanted to hear what the band have coming up next. And their second album is a great continuation of the music and still, the road still lies ahead on what is next for Corvus Stone.
Posted by znathanson at 7:20 PM

What a great read Zachary. Thank you making this review so well thought out. Rare indeed!