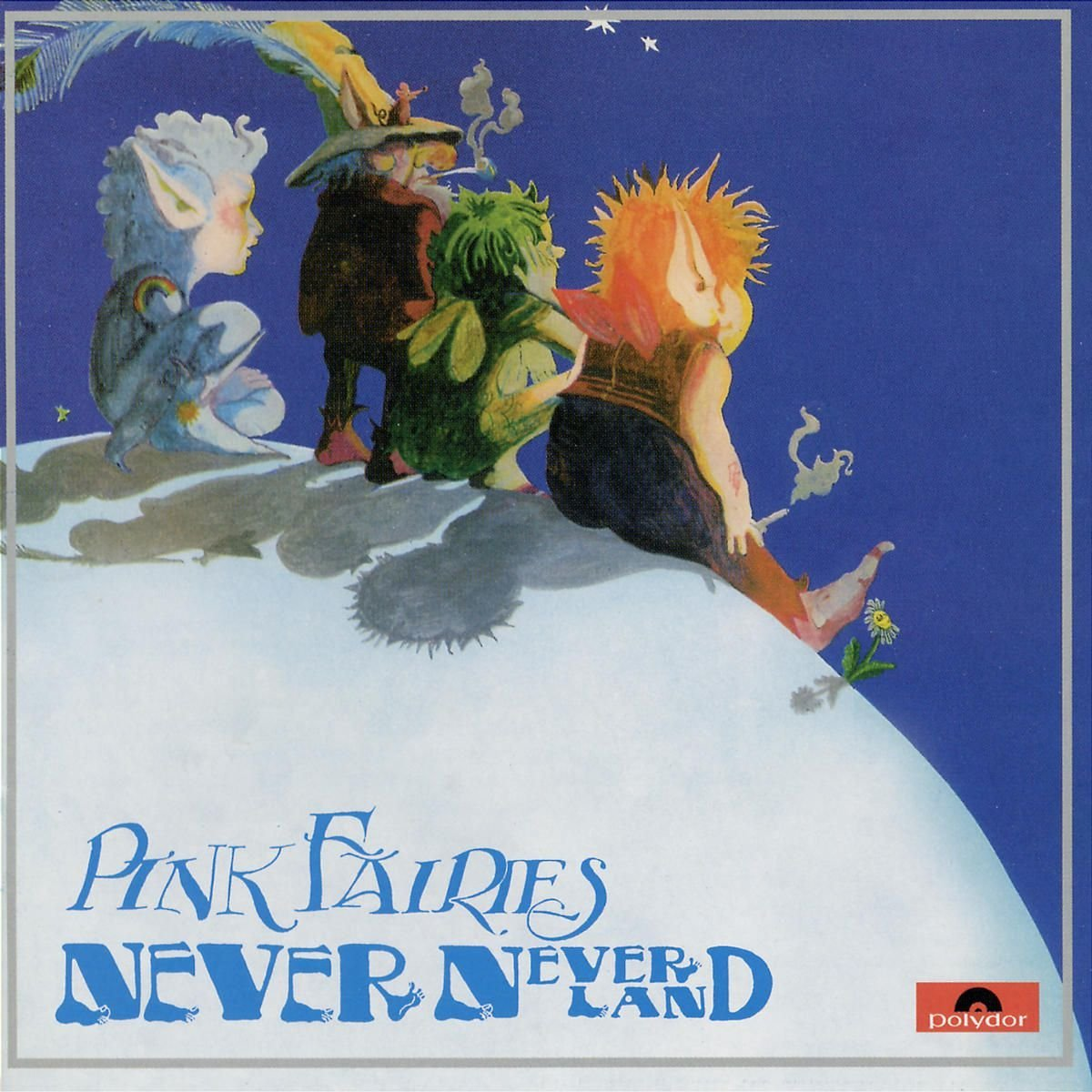 Formed out of the ashes of The Deviants, The Pink Fairies are one of the most overlooked proto-punk rock bands to came out of the Ladbroke Grove scene that was a part of the underground movement from the realms of; Hawkwind, Edgar Broughton Band, Quintessence, The Pretty Things, and The Action to name a few. Pink Fairies had this combination between the Stooges, MC5, Groundhogs, and adding a bit of spacey melodies to the mix by giving it a real cosmic hard rock adventure on their debut album released on the Polydor label in 1971 called, Never Never Land.

In the Pink Fairies; the band considered Paul Rudolph on Guitar and Lead Vocals, Duncan Sanderson on Bass, Russell Hunter on Drums, and Tomorrow and Pretty Things’ drummer, Twink adding to the mix and it is one of the albums that is a knock-out yet psychedelic momentum that they brought on to their first album. The album starts the engines off with Do It in which it is a tribute to social activist, Jerry Rubin and his book of the same name released in 1970. Beginning with a folk-like tempo on the acoustic guitar for an introduction for a minute and five seconds, then it changes the mood into heavier call-and-response as Paul Rudolph screams out and the band go into town with him as his solo is a psych-wah wah and punk rhythm chords to keep the tempo going up a notch.

Then it’s straight into the mellowing compositions that have a touch of the political backgrounds of
the Blues with a galactic vibe on War Girl along with the trippy and dreamy voyages on Heavenly Man and it shows their fantasy side and their laid-back moments that the Pink Fairies bring their softer side in there along with the far-out psychedelic adventure on the 6-minute title track as Rudolph just improvises with his guitar at the very end as he takes it to a world that is beautiful and being free from the chaos.

But it’s Track One, Side Two that does something very special for the first two minutes and forty seconds it starts with piano and drums as a ballad, but then they go into a freak-out session for the last few minute with a lot of rhythm and lead just going into different areas and I can tell the band are having a blast going into outer space with this piece. Then, after the mellowing pieces on here, the Pink Fairies get down to business.

With Thor, it’s very much a droning experimentation with a haywire vibe as it segues into pure attitude of three chord roar like a motorcycle ready to rev up and go into rebellion on Teenage Rebel. This reminded me of something straight out of The Groundhogs Split-era as to pay tribute to them and Paul’s voice reminded me of Lemmy and Tony McPhee as he is having a grand time along with the band going to unbelievable results as Twink closes it off going in the styles of Buddy Rich on his drumming like a tidal wave coming at you.

Say You Love Me is a foot-stomping, head-banging and fist-pumping attitude while the 10-minute jam session Uncle Harry’s Freakout Session, sees them going into the early reminiscent of Hawkwind. Rudolph is doing a lot of spacey voyages into the outer limits on his guitar as Sanderson and Twink improvise as he is increasing the voltage to a maximum level. You can tell that its heavy, psychedelia, shuffling blues and ending with a homage to Pink Floyd’s Interstellar Overdrive as to pay tribute to Syd Barrett-era as it ends with an echoing vocal effect with a sliding effect and haunting acoustic guitar chords on The Dream is Just Beginning.

The bonus tracks feature the rumbling driven force with an attitude of the single, The Snake along with a single version of Do It without the acoustic introduction followed by unreleased material of War Girl and Uncle Harry’s Last Freak Out. In the 12-page booklet, it features rare promo, photos of the group and liner notes done by founder of Esoteric Recordings, Mark Powell as he gives amazing insight about the history of the band.

So if you admire the sounds of Hawkwind, The Clash, The Groundhogs, Stooges, and the MC5, this is the ultimate Proto-Punk Psychedelic trip to explore the adventures of The Pink Fairies and ultimately it is an album to worth check out!
Posted by znathanson at 11:23 PM