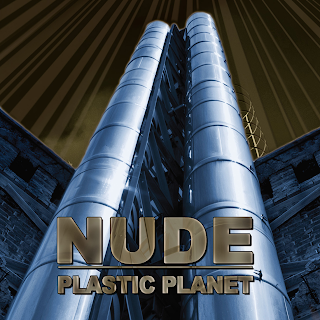 This Italian quintet has been around since 2001 and this is their second album. The group has this combination between Indie Rock and Gothic Music as if they were formed in the late ‘70s and early ‘80s to create some wonderful new wave sounds to make it a perfect tribute to the genre and a nice dosage of Talk Talk, Devo, and Joy Division. And this group is really amazing their album, Plastic Planet, feels almost like a score they could have done for John Hughes 1985 Brat Pack classic, The Breakfast Club and would have gotten them a stamp of approval from the late director.

The band considers Tommy Box on vocals, Nicolas Calluori on drums, Fabio Calluori on guitar, Antonio Pucciarelli on Bass and Marco Cozza on keyboards.  The thumping bass and soaring keyboard lines including heavy guitar chords on Down in the Garden, really captures the time period as Tommy captures the essence of Mark Hollis while Fabio goes into this thunderous guitar solo as Nicolas watches his brother by knowing he’s got his back.

Neon Smile has this thunderous moog synth hard rock beat that would hit the dance floors in a manner of seconds and would the place pumpin’ as Shanghai Basement goes into this style of the Synth workout of the NWOBHM (New Wave of British Heavy Metal) as if Devo had teamed up Judas Priest by doing a sequel to Breaking the Law. Then it’s about isolation and finding true love with the uplifting touches and grooves on Old Fashion Doors as the rumbling turned into an homage of Simple Minds Don’t You Forget About Me on Once Upon a Time, has an emotional and touching sensibility of makes you think how we were young and naïve back in the heyday of the ‘80s.

The haunting turned thumping-like chords on the title track, is a spiritual and spacey adventure on finding out who you really are. There is some wonderful moogy touches, heavy guitar lines, classical piano work, and soaring vocals, it makes it an amazing adventure that would take you beyond the atmosphere and into the milky way like you’ve never seen it before in our solar system. The closing track, Much Better, goes back into the Electronic Indie feel.

There are some of the moog-electric guitar sounds and the structures are well amazed as the song deals with on who the woman is better than his former self and finding out to get rid of your former self and becoming a better person and the music is dramatic and haunting to go out with a bang. Nude are a very interesting band and they know they are doing and Plastic Planet is the bands finest achievement and have got something up their sleeves.

Posted by znathanson at 1:53 PM