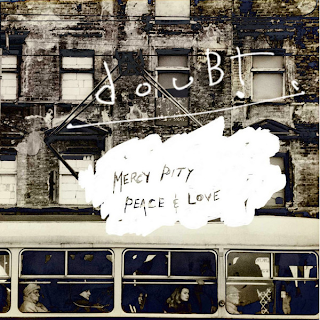 Exploration and Out of this World are two good statements to describe Doubt’s second album and shows how much they have admired the Canterbury and Jazz Rock sounds of the 1970s and it feels like it was recorded in 1973 that would have given Soft Machine a big jaw-dropping surprise like no other and they really have a deep love of the two genres. Doubt’s Mercy, Pity, Peace and Love, is a thunderous exhilarating album that moves into some crazy passages, psychedelic vibes, and heavy orientations to really get you going.

The band features two members from Machine Mass Trio (Michel Delville and Tony Bianco) and Alex Maguire who worked with Elton Dean and Hatfield and the North on keyboards. The three of them create some wonderful experiments and magic when they create some beautiful music and have done a lot of research to stay true to the Progressive Canterbury and the Avant-Rock scene very well. Not to mention a wonderful tribute to Jimi Hendrix as well on the funk-metallic vibe on Purple Haze to stay true to the piece featuring some fuzzy Rhodes going off the wall and Michel’s guitar just nailing his style and the way it is presented.

Compositions like the metallic No More Quarrel with the Devil, is featuring Michel’s raunchy guitar work and Alex’s moment to go into an ‘70s organ yet spacey stylization by paying homage to Dave Stewart, Gary Brooker, Mike Ratledge, and Dave Sinclair while Mercury has this weird combination of classical and Monk-inspired Rhodes piano work makes it an eerie touch. Then there’s Rising Upon Clouds, which has this musique concrete between backward tapes, sinister piano and drum improvisations, and haunting horn sounds by coming out of nowhere, by making it this RIO-inspirational composition along with the 12-minute title track as well.

Beginning with a mourning string section, electronic sequences, concerto piano work, a startling fuzzy electric keyboard improv, and Bianco’s crazy drum work, you could basically hear some touches of the Avant-Garde Rock scene of the ‘70s as if they teamed up with Zappa, Edgard Varese and Univers Zero by creating this dynamic, tension, and wildly experimental composition to give you some real terror. Then it’s the Funk-Rock attitude coming back into full swing with Tears Before Bedtime, featuring Alex doing some of the Metallic Keyboard by making it sound like a Power Chord while Michel does his Jimmy Page and McLaughlin-inspired sounds to really flow and soar at the same time before ending with a an atmospheric Mellotron/Guitar climax.

The closer, Goodbye My Fellow Soldier, has this surreal ambient avant surroundings as they take a nice and emotional funeral setting for all the soldiers who died in the past, present, and today for the bravery and sacrifice to fight for peace and freedom. There are some elements of Pink Floyd’s Sysphus from the Ummagumma sessions as more of the improvisations creating the dynamics of twisted strings on the keyboard, free jazz drum work, and swirling guitar settings, make it a nightmarish hell that is a mind-boggling experience.

I have listened to Mercy, Pity, Peace and Love about five times and the band has released something strange, but very complex, difficult, and wonderful at the same time. It’s not an easy album to listen to, but the people at Moonjune have scored a hit for me and it’s a startling album from start to finish. An album that is almost the soundtrack to Alejandro Jodorowsky’s 1970 western cult classic, El Topo.
Posted by znathanson at 9:20 PM