Crest of Darkness - In The Presence of Death 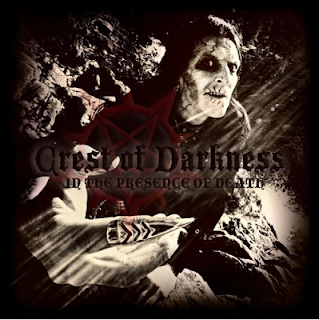 Evil, Political, Haunting, and Terrifying are some of the exact words when it comes to Norway’s own Death/Extreme Metal band, Crest of Darkness. Although the band’s name sounds like something out of an 1980s slasher film, the trio have been around since 1995 and their seventh album released this year called, In The Presence of Death is easily one of the most eruptive and headbanging albums to come out in 2013.

And while I’m not a wild fan of the Extreme/Death Metal sound, this band is something and it’s almost like something coming out the dark and cavernous cave as the beast has unleashed its cage to reign terror in the small town set to the rumbling and thumping soundtrack that is like a jet flying over you really fast going 600 miles per hour. The band considers Ingar Amlien on vocals and bass, Rebo on lead/rhythm guitars and keyboards, and Kjetil Hektoen on drums.

Growling, Screech and Shrieking vocals done by Ignar, thunderous guitar riffs that Rebo brings to the table to come up something that is out of the blue and would take you by surprise while the Kjetil drumming sounds almost like a machine gun bringing rapid fire in the midst of the bloodiest war, are combined into one as if the battle becomes a full-on gorefest. I can hear inspirations from the Black and Death Metal sounds of; Venom, Mayhem, Meshuggah, and bits of King Diamond in there as the roaring vocals are coming right behind you.

And with ten tracks by making it sound like the volcano has eruptive for an enormous earthquake, there is not a single bad track on this album that is found through Crest of Darkness and the punches they bring in, and send shivers down your spine, are quite spot on. Centerpieces like the rapid bullet ranging sounds of Vampire Dreams, Redemption, and The Priest from Hell, pays homage to the Thrash Metal scene in the early ‘80s as if they had done the score for Francis Ford Coppola’s 1993 Dracula as From the Dead is a fast-driven Hardcore Extreme Metal-Punk attitude of the road into hell as Rebo goes into town with his guitar work between rhythm of the minor chords and some power chords as well to go along with it and Ingar helps him out to reach that perfect note.

That said, In The Presence of Death, as I’ve mentioned before is an eruptive volcanic roaring realm where evil and terror comes to life, the guitar, vocals, and drum work are in your face and almost a big kick in the gut to give you a big leap out of your listener’s chair. Not to rip off any of the Metal influences they have up their sleeves, Crest of Darkness have assumed complete control over the sound and vision and it’s a wonderful combination of combining Satanism, Vampires, and Horror, and let’s just say they know their love of the three genres.

In The Presence of Death, is not an easy album to listen to from start to finish, but its soon going to have the headbanging scene in Norway a big jump for the Spring. Still, they are one hell of a band to come out of the Extreme Metal genre in their hometown and they are mind-blowing.
Posted by znathanson at 9:00 PM