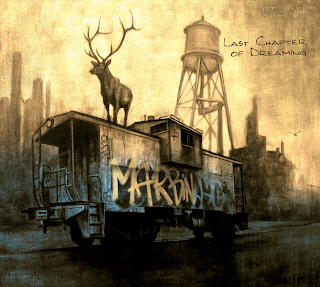 On hearing this new band from start to finish with their third album released by the good people at Moonjune Records, it’s quite obvious that this band from Chicago, are like an eruptive volcano that is waiting to explode lava all over the mountain. And let’s just say I’m completely blown away from this group and the album, Last Chapter of Dreaming is the trip going through different genres including Jazz, Swing, Spaghetti Western, and Prog at the same time. And while this is my introduction to the band’s music, I have to say this is one of favorite groups and their third album is soon going to be one of my favorite albums for 2013.

The band is name after the saxophone and guitarist last names Danny Markovitch and Dani Rabin (Marbin) and they brought along some friends to help them out on their third album featuring bassist Joe Gentile, drummers Justyn Lawrence and Paul Wertico, and percussionists Zohar Fresco and Jamey Haddad. Marbin’s music as you open the door, it feels like a Magic Carpet Ride as you explore different worlds that you haven’t seen before as you fly across different parts in a different era in the ‘40s, ‘60s, ‘70s, and early ‘80s and it’s a perfect combination to go in there. And its not just the album that is the ultimate trip, but to give you a wonderful touch on six centerpieces.

The swirling Swinging Jazz Rocking sounds opener Blue Fingers takes the listener back into the nightclubs where you can feel the smoke, the sweat, and the jazz dances that they were doing and Rabin just nails his funk-like grooves on his guitar to create a lush-like flame to set the beats and tempo while the dramatic and thunderous thump on Inner Monologue, pays homage to Ottmar Liebert, King Crimson, and Miles Davis rolled up into one with a Flamenco hard rock attitude as Danny just goes into town with his sax filling the tension going through these beautiful and difficult changes in the beat.

And then there’s Breaking the Cycle. As I’ve mentioned before, there are some touches of the Spaghetti Western score as if they were scoring Sergio Leone’s The Man with No Name Trilogy and would have given Quentin Tarantino a big stamp of approval. Danny does this Morricone-like sound on his Sax as if Clint Eastwood is getting ready for his showdown between him and Lee Van Cleef in the climatic finale of the movie, The Good The Bad and the Ugly and Marbin have shown their love of the Italian Westerns very much.

But the soothing beauty on Café Du Nuit, makes you feel that you are in the city of Paris with a classical guitar, accordion and sax walk across the Eiffel Tower along with wonderful vocalizations done by Leslie Beukelman setting the atmosphere as And the Night Gave Nothing is a mourning sax work for a loss one as Dani’s guitar lines, feels like its in tears as he goes through the rhythm and solo as he and Danny play different parts between each other. You can tell they are a team and it shows they have confidence in them.

But it’s back to Redline, which its back to the ‘40s by paying homage to the Mahavishnu Orchestra and the Diablo String Orchestra with another of the Jazz dances including the Lindy Hop and the Jitterbug and the Skip/Modern Jives to get you into a soulful movement like no other. I have listened to Last Chapter of Dreaming about ten times already, and this is clearly and mind-blowing experience and it shows that this is a band I will explore later on this year and Last Chapter of Dreaming is a must have album to listen to and its powerful tour de force.
Posted by znathanson at 9:37 PM