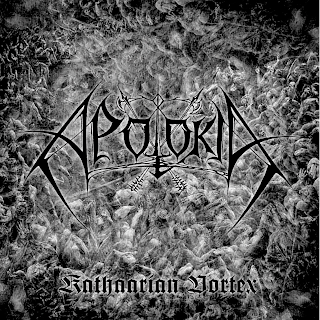 The evil has come into terrorize the town and it’s hard to imagine a raging beast that has released from his cage to reign terror, has come in full circles. And one of the bands to come out of the scenes of Black Metal scene is Italian/Norway duo, Apolokia. They will scare the living daylights out of you and they have been around for nineteen years and let’s just say that their sound will make you embark on a dangerous roller-coaster ride that you’ll never forget from start to finish.

Sneering and terrifying, the duo’s music had been released in two demos in the ‘90s, an EP in 2009, and now their first full-legnth debut album called Kathaarian Vortex, is a knock-out Metal album to the core. In the duo, the band considers Blackfrost and Verminaard and what they have done is make this extreme, vicious, and satanic at the same time and it almost feels like something crawling out of the tunnels and have unleashed one of the loudest albums I’ve listened to this year.

The guitar and the vocals in which it has the gut-wrenching monster-like growling vocals and the instrument itself along with the drums, makes it sound like a revving chainsaw that is ready for a full scale assault to attack. With a lot of energetic eruptive sounds between the nine tracks, and making it sound also like a rapid firing machine gun, they really know their Metal very, very well with punching fast-driven chords, and it is really fast that makes it a perfect combination and perfect sense on the album’s atmosphere.

The lyrics dealing with Nihilism, Satanism, and the Occult to name a few, even though its very disturbing and controversial at the same time, it make you feel that they could have been in a time machine in the 1980s opening for Sweden’s Mayhem and they would have got the crowd a rumbling response with their music and head bang like there’s no tomorrow. And the songs themselves can up to 5 and 6-minutes per length and understanding that this isn’t just a Metal band, but a band that can really push the envelope like no other.

I won’t kid you, Kathaarian Vortex, is not an easy album to listen to, but they along with Crest of Darkness are soon going to be one of my favorite groups of this year. And while I’m not crazy about Black Metal, Apolokia are one of the most explosive and eruptive bands ever to come out. This is a must listen to album for fans of the genre to sink their jaws into from the moment they hear the album from beginning, middle, and end.
Posted by znathanson at 9:24 PM