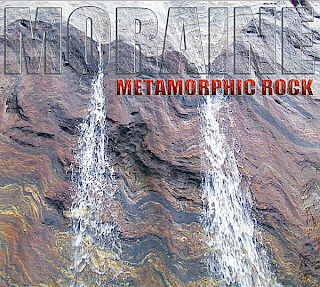 What happens when you combine a dosage of Atoll, Frank Zappa, Rock In Opposition, Mahavishnu Orchestra and some of the Canterbury bands of the golden era of the 1970s? Well it is a perfect match made in heaven from a Seattle Quintet that understands about the genres and know the score by a group called, Moraine. The band considers Dennis Rea on Guitar, Alicia DeJoie on Violin, James DeJoie on Sax, Kevin Millard on Bass, and Stephen Cavit on drums and their performance at Nearfest recorded in 2010 is one the most thunderous performances I’ve listened to.

Listening to Metamorphic Rock from beginning to end, you can tell the band was on fire that night and the audiences were in awe and jaw-dropped the moment the band got down to business. At times it’s dark, fun, joyous, sinister, and volcanic that feels like they did a score for Salvador Dali and I can’t put into words how much I enjoyed this album.  Alicia DeJoie’s violin work resembles Eddie Jobson, Darryl Way, and Jean-Luc Ponty as she creates these mythic and mysterious boundaries on her solo to create this nightmarish sound as her husband James pays homage to David Jackson of VDGG with some blistering sax moments that is out of this world which is evidential on Blues For a Bruised Planet, Save the Yuppie Breeding Grounds and the energetic Disillusioned Avatar suite.

One of the things that Dennis Rea does with his guitar work is that he goes through some heavy psych-jazz routines and at times with some harder edges to his instrument with the late ‘60s inspirational sounds on Kan Hai De Re Zi, the whirlpool of terror on Uncle Tang’s Cabinet of Dr. Caligari (an homage to the 1920 silent film), and the middle-eastern touches of Manifest Destiny. There is no tension and no competition on which is the best band member in Moraine, they were on tight and completely work like a team and just really let the electricity flow out with the power and the magic they have in the sound and creativity they have in them.

I’m now completely hooked on my introduction to Moraine’s music and having listened to Metamorphic Rock about six times already, I hope they will have something up their sleeves for this year in 2013 for upcoming Jazz and Prog festivals and see what they will have up their sleeves for years to come. Leonardo Pavkovic and MoonJune Records have finally unleashed something that is out of this world and that the beast has come to rein terror and Moraine is one of them. For anyone who admires the bands and the genre of the RIO (Rock in Opposition) scene of the ‘70s, this is a must listen to band and live album.
Posted by znathanson at 11:09 PM