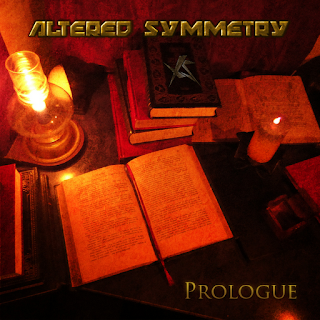 The cover of the album looks like something that was taken during the making of Peter Jackson’s The Lord of the Rings trilogy as the music is given with a wonderful and mind-blowing experiment. Combined with Metal and Story-complex songs, the band’s first debut album is something that you might want to take notice and pay full attention from the moment you hear this album from beginning, middle, and the end. Influences raging from Metallica, Dream Theater, Pantera, and the early days of Opeth, provides a huge resemblance in the city of Colombia.

Now I have a love of the Progressive Metal genre, no lie, but with Altered Symmetry, they certainly made a roller-coaster ride album with their debut, Prologue, as they take the music into a wonderous story into complex fairy-tales and a nightmare that will never end. Prologue could have been recorded as a soundtrack to the graphic novel, Batman Under the Red Hood and make it as a concept album, but with the stories influenced from Edgar Allen Poe and Charles Dickens, it seems as if they have done their research so damn well.

From Long Lost Love, A Joker’s Vengeance, and Justified Crime, there’s a combination between James LaBrie meets James Hetfield meets Mikael Akerfeldt in their soft, loud, operatic, and growling voice that makes it sound like it was recorded in 1988. The guitar’s sound almost like virtuosity meets a thrashing sneer that gives it a huge volcanic rock format that you can hear in the album as well. Also on A Slave Without a Master, sounds like a vicious metallic crunch that provides a rumbling element of the Six Degrees of Turbulence-era.

There are some breathtaking moments in there and the eruption of the album adds to the atmosphere and gives it a mighty explosion and takes the machine going without any stop sign for them. A 7-minute fierce and energetic roadrunner epic, Lies and Fairy Tales comes off with a mighty bullet from the shotgun and has a touch of the running sections of the guitar, drums sounding like a machine gun that is going on without any stopping to shoot through the story structures. You have to admit there’s a bit of a mini metallic opera in there as if they were paying homage to Pete Townshend and Mike Portnoy as if they were watching them and giving them a huge pat on the back.

And by the time you listen to Prologue, you can’t just put it down, you might have a few listens to it and may have mixed opinions on their politics, whether you love or loathe it, it takes a good while to understand where the direction the band are going into. To put in more precise, if you admire Dream Theater and Metallica, you probably might want to check this album out and see where the trio are going for them, because the road for them, is just the beginning.
Posted by znathanson at 8:36 PM

Thank you so much for your review, we are glad that you enjoyed our album, we are posting the review on our web site right now. Cheers¡¡¡

Thank you very much! And You're Welcome!