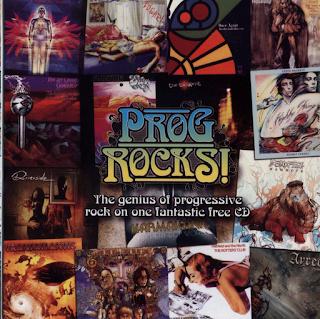 Now if you want to look at the geniuses of Progressive Rock that is an excerpt on what is about to come in a 2-CD set, well, you’ve come to the right place. But you must place your right hand to know these things before I move on. A; Prog is no longer a dirty word, Justin Bieber is a dirty word and B; listen to real good music. In what is here in this free CD compilation done by the good people at Classic Rock Presents Prog and the editor-in-chief, Jerry Ewing in which comes with the magazine featuring the Yes issue dedicating 40 years of Fragile, it seems the fairy tales has gotten a lot bigger.

Not only that the campaign that the magazine has been helping out with labels including EMI and InsideOut/Superball have been working hard on their butts to stay true to the music, but it’s time to go back on the magic carpet and enjoy the ride that you’ll never forget. This isn’t your typical compilation album, but an emotional and fabulous, majestic journey that you will embark on as the ride keeps you going as you reach to the edge and the passages of time. As the small booklet says, “A Unique Celebration of the Progressive Rock genre, past and present”, let’s start it off with a roar.

Starting off is the new stereo mix done of Jethro Tull’s Locomotive Breath which is from the 40th anniversary release reissue of Aqualung, is a wonderful mix. You can hear the drums and bass lines loud and some of the pieces I never expected from the original 1971 release, just got a beautiful treatment that Steven Wilson has done and has make sure to stay true to the effort of Tull’s music like a volcanic eruption as the highlight CD shows some bands you’ve heard of and up-and-coming bands you might want to take notice.

Van Der Graaf Generator’s melancholic tribute to Susan Penhaligon on Refugees, Barclay James Harvest’s orchestral symphonic fantasy rock sound of Galadriel, and Eloy taking the Space Rock sound into uncharted territory with Castle in the Air, with swirling guitar and bass lines that is out of this world. Then we go into the Canterbury land of Jazzy whimsical compositions done by Hatfield and the North with Lounging There Trying for more different time signatures while Steve Hackett goes into the Symphonic mode ala early ‘80s style with Cell 151 as neo-prog maestros Marillion tell a story of a marriage go into a fucked up world on Punch & Judy.

But then it’s the new waves of Progressive Rock of the 21st century that makes you want to say, “Wow!” With the Flower Kings and Riverside helps the campaign a wonderful touch into the new sounds of the genre, it is a fabulous ride, not to mention the disturbing and humor elements on Monkey Business and Conceiving You while Ayreon’s Comatose carries the spirit of the Concept Album-era and revise it and feel like the Sci-Fi rock opera elements has gotten a warm handshake.

But it’s the return of Transatlantic line-up as they carry the spirit of the Close To The Edge-era on Overture/Whirlwind and the reminiscent of early Genesis ala Jazzy style done by The Tangent that lets listeners know that the genre just roared with a huge alarm clock as it sends radio waves to let them know that we’re back with a vengeance. And as texas’ own answer to experimental metal from And You Will Know By The Trail of the Dead with futuristic ride into space on Pure Radio Cosplay seems in the realms of Prog, Metal, and Punk makes it feel like it’s going into another room.

Sweden’s Beardfish and Karmakanic close the compilation up with the ‘70s retro rock Tightrope and Turn It Up, would give the listener a chance to provide a chance to hear these new bands and see where they are going to take the music with them and focus how Prog has influenced a new generation of fans and bring the future brilliantly and it is a new dawn and a new day.
Posted by znathanson at 9:08 PM