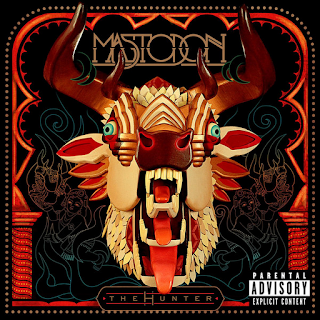 The new space cadets of progressive sludge metal has come back in full swinging force is all that is needed to view the concept and view the other side of the post-apocalyptic world and seeing where the direction will lead them into. Following up to a previous album is not that easy and seeing which new sound will change and deciding whether they want to stay true to their roots or go into the realms of melodic structures in which the palms of the hand will take them to. But what we have here is full assumed control from a huge follow-up with The Hunter and it shows that Mastodon aren’t making any excuses, but to take the prog metal torch into the Olympics and burn the oil in the night time sky.

Already going into a psychedelic meditation experience with Crack The Skye released in 2009, they feel that it’s a twisted adventure that they must go on for their follow-up with sneering guitar sounds, prog-punk, thrash metal, and dealing with what’s happening on the news including the Wall Street protest and the 1% issue that’s been going on at the almost end of 2011. So if you’re into a swirling whirlpool of terror from the four-piece to lend out anger and story-telling complex, well, you’ve come to the right place at the right time for an adventure that you’ll never forget.

And The Hunter is one of the most explosive and most attention albums that is one of the band’s finest moment in Mastodon’s history. With their new album, it is breathtaking as when Crack The Skye got me introduce to the band’s music as if it was recorded in the late ‘70s and early ‘80s with a combination of early Genesis meets the Kill ‘Em All-era of Metallica. Now you’re not going to hear 10 and 15-minute epics that was on the previous album, but what Mastodon did so damn well is its time to let the beast run loose and go buckwild and The Hunter is like a roaring anthem with its spine-tingling centerpieces almost as if they have left some of these songs for the Crack the Skye or Blood Mountain sessions.

The opening disturbing cinematic touches of Black Tongue, gives a twist on what’s about to come while Curl of the Burl and Blasteroid give an ear shattering metallic guitar driven crunch as the mad scientists let loose of their experiments and seeing where the monster will take the compositions to where it takes them. Then they go into the Prog momentum in paying tribute to their heroes of Hawkwind’s In Search of Space-era on Creature Lives. It has this moogy atmosphere and a very melodic psych-rock momentum as if they pay tribute to the Space Rock warriors with a bit of the Beatles Sgt. Pepper-era and I gotta admit, it’s a mind-fucked track, but very cool at the same time.

As for the doom metal touch on The Sparrow and the hardcore punk attitude of The Ruiner and Deathbound, they sort of go in the ring and decide who will win the boxing match, but there is no idea had they might win: they switch through the three genres and they don’t have the faintest idea who will win, but the complex is tight and tugged really hard as if the rope is dangling towards the persons doom while the spookiness of Bedazzled Fingernails sounds like a crossover between Metallica and the Thrak-era of King Crimson with a touch of the Fripp guitar sounds from a satanic force.

Not to give any bullshit, The Hunter will have a drawing line in the sand between the fans and deciding whether they love the album or spit on it and jaw it out and say it sucks, but you can’t deny how fucking amazing that this is the perfect Christmas gift for a metal or proghead to really get a real kick out of this and seeing how awesome it sounds from start to finish. Like coming out of a disturbing cave, Mastodon have finally saw the light at the end of the tunnel and the journey for them isn’t over.
Posted by znathanson at 9:50 PM