Steel Mill - Jewels of the Forest (Green Eyed God Plus...) 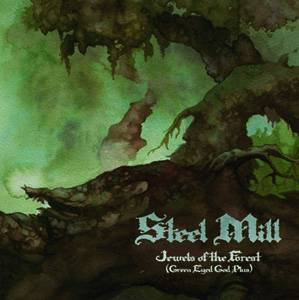 One can quite understand to be featured here on Music from the Other Side of the Room, is a special edition to feature one of the most amazing lost bands to come out of the ‘70s. With the Internet on our loyal fingertips to search for unknown bands that never saw the light at the end of the tunnel, whether it’s obscure metal or unsung progressive rock bands, they are finally getting the recognition they deserve in the future. As music lovers act like pirates from Robert Louis Stevenson’s Treasure Island to search for unseen treasure in the mysterious Caribbean Islands that Long John Silver believes they are hidden in, the bands hidden gems of their albums are going up for an expensive price up from $800 to $2,000 up on eBay or go to Prog festivals in search of the lost albums as if they are Indiana Jones to search for the missing album that the band recorded and disappeared.

Lucky for Lee Dorrian, member of Napalm Death and Cathedral, whom I praised for working on the Luv Machine album Turns You On and Necromandaus Orexis of Death reissue released last year, he is now the new Sherlock Holmes of unsung gems of the obscure progressive and metal bands that are getting a lot of attention from the Rise Above Relics label. With that and Steel Mill’s only one debut album, Green Eyed God have been considered the mysterious band that never was until Rise Above found only two of the members to tell the whole story about the band that never was. Now in a brand beautiful packaging including a 32-page booklet about the band’s only debut album, has finally been re-mastered since there was several attempts were poorly restored in a bootlegged way, has now sounded much better before than its original release on the independent label, Penny Farthing back in 1971.

Their eerie music sounds almost as if it was recorded through the dark and cavernous caves of early hard rock and tiny parts of the prog sound into a speeding car that drives about 600 miles per hour on the race track. Now under a new title Jewels of the Forest (Green Eyed God plus…), it goes beyond the album with unreleased tracks that Saxophonist John Challenger had in his attic are now getting the best sounding to get as Lee Dorrian mentions in the liner notes, “These tracks have been painstakingly restored and combined with original tapes from those very sessions, to create the best sound quality possible.”

Also included is a new song for the first time from two members with vocalist David Morris and Winds instrument, John Challenger of the zooming sound of Steel Mill’s early days and an homage to Jonesy’s Mind of the Century on A Forgotten Future, A Future Past. It’s been now 40 years since this album came out and let’s say that the Champagne bottle is bubbling with excitement. From the crunching riff opener of Blood Runs Deep, the mellower flute rock haunting call of Summer’s Child, the 7-minute homage to Locomotive’s We Are Everything You See in a middle-eastern rock value on Mijo and the Laying of the Witch, to the single hit that got played a lot on Radio Luxemborug of the sinister title track, for all of the achievements the music wasn’t going into the deeper realms of the mainstream.

The mixtures of Guitar, Flute, and Sax are fierce and angry which dip into the river of Black Widow’s music, goes into a controversial political boundaries that would piss off two members in the audience at Ladbroke Grove with their first approach of a political protest song about the Civil Rights on Treadmill. The lyric, “Curse the Water to hell/Hey you scum dread in time/On the tramp in the line/Tie me down to a stone/Hear my body twist and moan.” It’s disturbing and how you can tell what the scenery in Alabama and the Assassination’s of Martin Luther King Jr. and Robert F. Kennedy had a huge impact on Steel Mill as they were watching the horror unfolding in America’s Southern State of Alabama and Mississippi and in England with the Race Riots before working on the album. Then comes the piano ballad with a sweet and a little break from the heavy sound with Turn the Page Over while Black Jewels of the Forest goes into the inspirations of Edgar Allen Poe and H.P. Lovecraft with a dooming tribe calling of hell in the realms of Witchcraft. With no bad track in the expanded reissue, Green Eyed God closes the album with 47-second jazzy short little flute ballad in the time signature of 4/4 on Har Fleur.

As well with the album’s power house lost classic, the expanded edition adds three of their singles and five of the unreleased tracks that were recorded in April of 1970 in mono. By listening to these unearthed tracks, you can tell that these tracks could have been a double album and would have gotten Steel Mill a lot of recognition. There are three centerpieces on the new tracks that would make your feet tickle for joy. There’s the Pounding ragtime piano rocker Get On The Line while the funk soul rocker of Blaxploitation super heroes on Super Clean Man comes in. Mixed with the guitar riff, vocals singing the melody, and stacked pounding drums that is straight out of Curtis Mayfield’s sessions for Superfly. Yet best of the unearthed tracks is the psychedelia jazz sound was Growing Bald, which has the guitar in reverb sound and mournful vocals along with John’s sax filled with Coltrane and VDGG’s David Jackson, could have probably been Steel Mill’s obscure-psych dance track.

Green Eyed God still sounds like a fresh baked bread that had just came out of the oven and add that with some delicious pasta, it’s music still carries the cult following sound with prog and obscure music lovers to get this album a lot of attention. The love of unearthed albums is a lot of worth investigating to check out for detectives and music researchers to see what was left in the record vaults on what was hidden underneath the prog treasure. Always.
Posted by znathanson at 11:22 PM