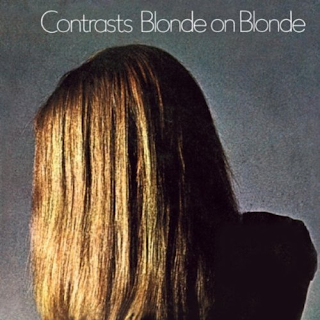 It’s quite understandable to see where Blonde on Blonde were one of Welsh’s obscure progressive rock bands to come out of the late ‘60s. While I adore their second album, Rebirth, reissued by the Fantastic Voyage label which was originally released on the Ember label, their first album, Contrasts, is an appropriate proto-prog album. The band was signed to the Pye label and released their debut in June of 1969. Contrasts features cover songs and a musical psych approach that was the bands new adventure that would come for them.

Blonde on Blonde brought a mixture of psychedelic and raga-rock with guitar, organ, sitar, and dramatic percussion orientated beauty here. The evidence of early prog is here with the dramatic introduction Ride With Captain Max that sounds like something that was left out of the sessions of the Rolling Stones Their Satanic Majesties Request with a pounding percussion roar, sneering guitars, and a thundering bass line that makes it perfect for a roller-coaster ride before going into a calm folk-like lyrics that is yet a breathtaking experience.

And that was only the beginning. Next, we have the early beginnings of raga-rock with sitar and flute on the groove with Spinning Wheel while their cover of No Sleep Blues originally done by Scottish Folkies the Incredible String band. It has a country rock flavor but with a humoristic point of view to pay tribute to them, but according to notes, “a while sequence of trauma in miniature” makes you realize that this piece will give you quite an understanding to the song.

The homage of the Zombies song, Imagine The Swan is evidential on the flourishing and soaring sound of the Hammond on Goodbye. It has a baroque pop sound that is quite surprising for Blonde on Blonde to do as the song deals with moving on and saying farewell to school, family, and friends and into the clouds of heaven to start a new life after death. The garage rocker I Need My Friend, has a great pounding piano work, fuzz tone guitar sounds, and vocals that Ralph Denyer has in the realm of Roger Chapman.

The dooming and explosive Mother Earth is quite an underrated song, but with a menacing folk and hard rock sound dealing with the spiritual world, it’s a crowning achievement for them to deal with social issues on Contrasts. They would also embrace the Beatles music with the medieval, mariachi, and symphonic folk crisp of their cover of isolation, outsider and death on Eleanor Rigby while the psych-pop mood kicks in the B-side single and their homage to Eric Burdon and the Animals on Conversationally Making the Grade. It has a soul sound rather than a funk influence as Ralph just brings the influence of Burdon’s voice into the gospel-like energetic rumble.

Regency is a short instrumental piece that goes into the classical sound of the 15th century with harpischord and Spanish guitar fingerpicking techniques before seguing into the Renaissance Folk beauty on Island on an Island. Don’t Be Too Long has an emotional ballad about moving on and leaving to start a new life at a different city as the song has a Nick Drake element feel to it as the closing track Jeanette Isabella has a bit of the eerie tribute to a psychedelic female fictional singer that has a love-song feel, but with a West Coast sound that could have been a bit more majestic and heartfelt.

The two bonus tracks because if you think that Contrasts is over and done with, well the people at Esoteric Recordings have got a surprise for you. The two tracks from the A & B-sides of the single. Here, we have the homage of Tyrannosaurus Rex of the raga rumble on All Day All Night and the psych-pop marriage issue of Country Life. This rare album is a must have for anyone who wants to get into the deeper realms of the underground-era. It’s so amazing that you can hear what the bands sounded like and never got the achievement they deserve from the past until now.
Posted by znathanson at 4:29 AM