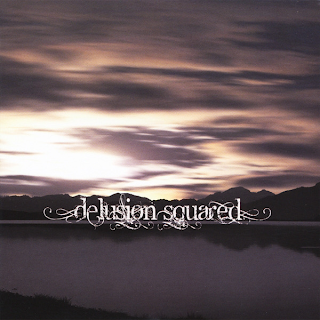 Since their formation in 2009, French trio Delusion Squared have got a long road ahead for them and their self-titled debut album is a mysterious concept album about a Post-Apocalyptic land into four chapters. The story is about a girl that the strong free will against what was to bring peace for the Arcologies. Before that she was against the gene alterations and wanted a DNA to tamper with to get pregnant. She was arrested and soon was found by many years later by the Elders and took her in as if she was their daughter to them. She becomes a leader to them and dies at the age of 97 as they considered to her, the “Mother-of-all-people.”

The story is something straight out of a Philip K. Dick short story ala Blade Runner style, but it’s quite heavy stuff for a band to go beyond the pregnancy act, but the songs and the music are brilliant. The band is clearly in the realms of Porcupine Tree’s Delerium-era and the OK Computer sounds of Radiohead. You can tell that just before the band was working on their self-titled debut album, they were listening to these two bands and researching on how the sound was done, using technology and the way they were recording the music for the future and it is quite evidential when you hear this disturbing sci-fi album. And let’s just say this is not your daddy’s concept album, this is the concept album for all generations to take an understanding of politics, betrayal, renewal, death, and being considered a folk hero.

Opener, The Very Day creates an alternative folk riff futuristic sound of Delusion Squared’s love of the ‘80s New Wave of British Prog. With a train chugging acoustic rhythm guitar sound, burst of Wilson’s homage of atmospheric guitar sound and layered technique, the keyboards sounding like 2518, and Lorraine Young’s vocals sounds like a female version of Thom Yorke, really adds the touch of the power of the future to a soaring roar. Meanwhile on the eerie and moody In My Time of Dying, it firmly belongs to the atmospheric orientation of isolation that Young carries of her vocals about the girl’s life. It has this classical guitar sound in the finger picking technique as the keyboards pay tribute to the early days of Tangerine Dream’s Phaedra sound while the guitar goes into a Gilmour-sque melodic dark sound.

The 7-minute composition, Copyrighted Genes, sees the band make a tribute towards Porcupine Tree’s Fear of a Blank Planet with a jazz-like percussion sound, sneering guitar metallic roars, folky-riffs on the acoustic guitar, and a Vangelis-sque sound that could have been recorded in 1982 for a sci-fi vision of I, Robot. The sinister but suspenseful twist of Betrayal provides the girl’s trial, as the keyboard that Emmanuel De Saint does brings a Floyd-like sound that was taken from the sessions of The Division Bell as Young plays some Ottmar Liebert classical guitar licks in the midsection before the band go into as the judges sentencing the girl to prison as the music really adds the drama inside the room.

The mellower Sentenced that forms the guitar surround sound grips the girl’s isolation in different textures for the first few minutes of the song. At times it’s almost that Lorraine Young has got the torch of David Gilmour to light the Prog Olympics within the flames arising. The time signature is in ¾ and 4/4 as they spent into the storyline to rebuild to find freedom and Saint’s keyboards and drummer Steve Francis almost make the track a bit more of the Pink Floyd sound to make it very peculiar. By the Lake (Mourning) and (Seeding) are both beautiful and haunting tracks and this time it’s Saint’s time to shine as the band go back into the New Age sound that would make you go back and listen to them all over again.

The first part is very Keyboard and guitar layered sound while the second part features a disturbing fuzz tone bass line that Saint does while Young does her homage to Kate Bush in her vocals as she brings the guitar to a spooky yet creative territory as Francis lays down the drum patterns to calm down for the girl to be saved from the Elders. Rebirth starts off as a haunting lullaby opening section for the disturbed children of educational programs and perfect for Argento’s Suspiria before going into a fierce progressive metal experimental adventure in the realms of King Crimson’s Red period. What We Will Be begins with a Stephen Hawking voice which almost sounds like him as he describes the question, “What is the planet Earth going through right now?”

It almost sounds like Radiohead’s Fitter Happier as the atmospheric keyboards come in for the voice and then it’s a mourning ballad, with emotional lyrics dealing on who we are and why are we on this planet right now – even though it’s a situation to go green and being free to bring world peace to the globalization than where we are right now of war and destruction. Yet the last two tracks, The Departure and A Creation Myth that really sets a mysterious finale as the woman dies of old age, she is now a folk hero to the people on the planet and now her message will spread throughout the whole world. Opening with a classical piano sound before going through a layered guitar segment and a funeral song for the woman, Young really sings this peace as if she sang this inside a gothic cathedral while the band members wove into the atmospheric tradition that delivers a huge touch.

The last track has the Mike Oldfield keyboard testament at first before going through the alternative rock format of acoustic ballad through the band’s touching power. Ultimately you may play this album about three times to really get you into the band’s touch of progressive goodness with a ooh-la-la flavor to the Prog Torch. For keeping the concept album torch fire growing from their influential background growing up in France, Delusion Squared has really captured the essence of prog. Not a great album, but taking the step forward very carefully.
Posted by znathanson at 1:07 PM