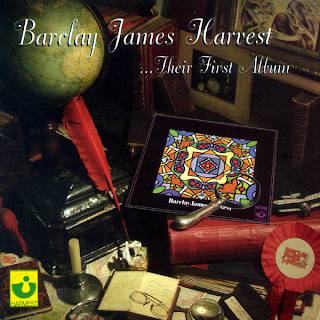 The passing of keyboardist Woolly Wolstenholme last year, has mourned a huge loss for the Barclay James Harvest camp and at Esoteric Recordings as well. He was not only just a keyboardist for BJH and Maestoso, but he brought the fire and the energy with him and the voltage’s that gave the music with the band and for the fans how music was meant to be sound and heard. This here on the blog site, is a special edition review of Barclay James Harvest first self-titled debut album released in 1970. It’s been 41 years pre-Once Again area that would open the doors for them and in the realms of the beginnings of Symphonic Prog, early sounds of the psychedelic sound of the underground movement in the U.K., and a huge tribute to one of their heroes, The Moody Blues, it’s shows how the band could have been the next Moody Blues or the next Pink Floyd.

Since forming in the late ‘60s, the four men from Yorskhire: John Lees, Woolly Wolstenholme, Mel Pritchard, and Les Holroyd were now taking in a lovely touch of classical orchestral rock as if they were making a sequel to In Search of the Lost Chord, with a touch Woolly’s soaring mellotron sound and angelic lyrics that was more of a tribute to the Beatles Sgt. Pepper-era. The band released their debut album under the Harvest label (no pun intended) and with help from Norman Smith and The Enid’s Robert John Godfrey to conduct the orchestra on three tracks, makes the album more pastoral and in the realms Beethoven and Bach teaming up and forming a band together, it would be BJH.

After listening to this album about three times, Barclay James Harvest’s music was almost like a mixed sound. From the straight-forward rockers Good Love Child and the opening West Coast Rocker Taking Some Time On, the Renaissance melodic folksy beauty of Mother Dear, the tender yet emotional ballad love song-inspired of The Sun Will Never Shine, to the orchestral homage of Procol Harum’s In Held ‘Twas In I on When The World Was Woken, for a head start on a debut album, the band were on a good start and the music was right between the eyes. The mellotron adds the haunting sound that channels the band with their compositions that flows deep into the river.

The haunting melodic ballad, The Iron Maiden, sees BJH go into the water of progressive folk beauty of the 17th century, but a song describing about a torture device makes it very strange, but beautifully poetic with lyrics like; “She walks on through the night/Her circumstances slight/Are only helping her to fail/And though she feels she’s right/She tries with all her might/And makes the deepest peril pale.” When you have a song about the woman’s doom of inside the torture device, you know this is going to be painful, but a beautiful description on her last days as a survivor.

Not one bad song after another, we come to the 12-minute epic, Dark Now My Sky as the closing finale. Starting off with Woolly Wolstenholme’s homage to Peter Sellers and Laurence Olivier in his humoristic form of Shakespearean way of the spoken introduction and a maniac laughter from composer Robert John Godfrey, really adds the epic score swarm with an orchestral bliss before going into a dooming post-apocalytpic Floyd-sque sound. Some might believe it’s out of place, but the way it’s done it rather is a wonderful touch of the Pastoral Rock sound to give it a real punching feel. As with the 2002 release, the bonus tracks adds the failed singles that would have gotten BJH a warm reception for the Beatles to accept. It has the BBC Sessions with John Peel and makes these sessions, feel welcomed and offer what the band was doing before making the first album.

Sometimes, Symphonic and Orchestral Rock beginnings is much more fun to look at and seeing what the band was doing before deciding where the direction they were about to go into. A magnificent debut album at it’s finest.
Posted by znathanson at 9:10 PM