Black Mountain - In The Future 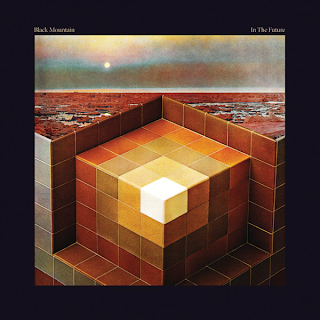 This Canadian five-piece band have been around since forming in 2004 and their second album, In The Future released on the Jagjaguwar label back in 2008 is the band’s finest albums to come out of the late noughties. It contains the sounds of the early psychedelic sounds of the late ‘60s, obscure prog entities, and early doom metal in the realms of Black Sabbath and Black Widow have been awaited with a warm handshake. With only 10 tracks and the vocals of Stephen McBean and Amber Webber often sound like a futuristic version of It’s a Beautiful Day when they bring the sound of what the future is like, but here, these things could work like a sci-fi animated score made in Japan.

Alongside from their marvelous artwork on the front cover, In The Future is Black Mountain’s baby. Perhaps to pay tribute to fellow space rockers of Hawkwind with Quark, Strangeness & Charm, here Black Mountain have got a lot of energy in them inside their brains and heart. From the fierce opening of Stormy High, you get the feeling that this is an album to be a roller-coaster ride that you won’t forget. The song features a thunderous riff that blends in with the flourishing organ work with their hard rock solar system momentum. Yet it’s very much have a King Crimson flavor ala Schizoid Man style in there too with the heavy prog sound.

Angels pushes into the melodic groove which goes into an Alternative mode thanks to a cool drum beat that Joshua Well does to give the band members a chance to feel the changes in the song while Stephen creates a spooky rhythm sound on the guitar along with his voice and Webber to set up the scenery along with a teardrop mellotron sound that is the key point of the album. The 7-minute piece Tyrants is in the realms of the militant rocker sound of Black Sabbath’s Children of the Grave at first, but then it goes into a dooming section which manages not to make sound like a rip-off of the doom metal sound, but to get the middle-eastern psych flow with a lot of juice to get the energy going that realms into a mind-boggling finale.

Having Stephen McBean and Amber Webber paying tribute to Jefferson Airplane, Blood Ceremony, and The Devil’s Blood, there’s one track to get into an acoustical mode to recall the band’s love of the psychedelic sound. You have Stay Free that offers a bluesy folk rock sound that moves away from the experimental sound and yet into the sound of the ghost-like version of the Kinks Don’t You Fret. Then it’s Amber Webber taking the vocals to home base with her touch of Thom Yorke and Bjork mixed up into one as she demonstrates it in the mournful Queens Will Play – a disturbing song which features a sneering rhythm guitar, organ riff, Omar Rodriguez-Lopez guitar solo licks, and haunting background vocals to give the post-apocalyptic yet gothic scenery that is chess with attitude.

You may find the band go into a swinging metal mode with Evil Ways as Bassist Matthew Camirand creates some dooming bass lines while Josh goes Billy Cobham on the drums, as Stephen McBean does his early Ozzy Osbourne Sabbath sound on his double-tracked vocals as the band go into the sound of the 1930s as if Metal was created in the scenario and performing this track with Duke Ellington teaming up with Coven and Steel Mill that would feel strange, but perfectly comforting to get you in the room to perform with them. Wild Wind is another stripped-down ballad that lets the band to calm down from some of the weird and infinite sounds from In The Future while the 16-minute epic Bright Lights is the centerpiece of Black Mountain’s career.

It has the elements of sessions from Radiohead’s Kid A with the Native American Indian tribe sound that the band does thanks to the thumping sound that Josh does as it dives into the swimming pool of hard rock before going into the ambient/atmospheric finale tribute to Krautrock heroes Tangerine Dream and the Space Rock cadets Ash Ra Tempel and it only goes into the milky way with the finale of Night Walks succeeding the early Floyd sound of the 1968 album, A Saucerful of Secrets as Amber gives her voice and Organ a mournful funeral sound inside the church. Black Mountain deserves to be the next progressive rock band of the 21st century. In The Future also proves to be tested a Space Doom Metal Rock sound that deserves a lot of attention.
Posted by znathanson at 1:52 PM