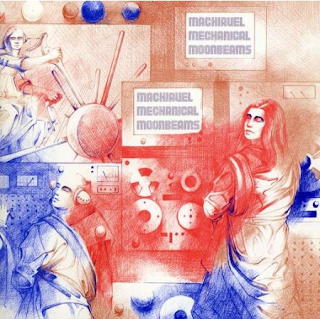 Described as one of the most important progressive rock bands to come out of Belgian in the late ‘70s, Machiavel was formed in 1974 by Roland De Greef and Marc Ysaye after leaving their band Moby Dick and brought guitarist Jack Roskam and keyboardist Albert Letecheur and formed the band naming the group after a 15th century Italian philopsher. With two CD reissues seven years ago, the album, Mechanical Moonbeams, has finally received the Esoteric treatment with an amazing package, liner notes by Wouter Bessels, and two bonus tracks.

Machiavel’s third album to the follow up Jester, sees the band moving forward into a commercial direction. Mechanical Moonbeams was the last album for them as Punk and Disco was coming in like a rumbling volcano waiting to erupt and it meant for Machiavel that it was time for a change, but here on the album, it was more Symphonic Hard Rock and knew that this was going to be a huge hit in the European Market. This was a huge pressure for the band to build on the record sales and received critical acclaim by the time the album came out and started to experiment hit after hit with songs like the acoustic folk crisp, Rope Dancer, you can tell they were heavily influenced by Genesis’ early days.

Machiavel were also making great songs that becoming singles like the melodic turned mellotron-riff hard rocker done by Letecheur on After The Crop and having Mario Guccio’s voice turn from Jon Anderson of Yes to James “J.Y.” Young of Styx, but they were putting classical music, guitar layered sound, and songs that relate into the realm of Yes worked out well. I can hear the influences alongside Yes and the band listened and researched on bands like: ELP, Pink Floyd, and Jethro Tull were doing and decide to give it a push. Here on Mechanical Moonbeams, the album is like a well-baked cake that deserves the cherry on top of the icing.

Two of the bonus tracks that the band recorded for the sessions never made it to the final release of the album. Wind of Life and I’m Not a Loser, almost could have been a part of the album. Wind is a very atmospheric-medieval ghost-like melody that seems twisted while I’m Not a Loser represents the Glam-Prog sound of Be Bop Deluxe’s Bill Nelson’s songwriting. The two compositions neither went on Moonbeams, but it proves to work with a surround quality of momentum.

Beyond The Silence, the opening 6-minute track, features Jean-Paul Devaux’s guitar passages, Albert’s keyboard passages that goes through various time changes as he takes the Synth for a drive in the highway while drummer Marc Ysaye follows him wherever he goes and this is not a bad thing after all. Albert’s keyboard playing is soaring and dazzling at the same time. There’s a mixture of Keith Emerson and Patrick Moraz as if he could have been Belgian’s answer to the kings of Progressive Keyboard solos.

While the Symphonic word always follows me where ever I go to, it takes me to a new direction with a band that sounds good. Though in the footsteps of Yes as if they teamed up with Supertramp, the magic is there in the album and Beyond the Silence is almost like a high drive towards the highway and throughout the piece, you can hear the influence of Starcastle’s pomp rock sound and lets the listener know that they still got the ingredients in there for those mind-boggling keyboard solos to give it a real punch and this is a fine toast for Prog Keyboards to go apeshit crazy.

Meanwhile, the beginning of American Pomp Rock suddenly comes into the background and becomes the majority to save the day. With a melodic space rock passage that Albert does, it transforms into a heavy metal rockin’ power house that gives it a huge juice on Summon Up Your Strength. It’s a strange ingredient. Heavy Metal and Prog? Why the hell not! The late ‘70s beginnings of Progressive Metal suddenly comes out of nowhere almost as if Led Zeppelin had teamed up with Yes to work on Close To The Edge. Strange track but perfect to the fierce-like length.

Rebirth is another beautiful track clocking in at 6-minutes. At first it sounds like an AOR passage, but then turns into a various time changing classical rocker as Albert’s concerto classical piano sets up the pace in a Road Runner mode for the band as the mellotron comes in for the dancers to go beyond the tango and create a twisted dance for Machiavel’s music. Pastoral Eerie Acoustic Folk Melody comes back into the picture again. This time on Mary, it’s Jean-Paul’s acoustic fingerpicking guitar work and Albert’s spooky synth sound and Mario’s Gabriel-resemblance vocals that puts the Genesis sound into the picture as if this piece was recorded in an English Cottage to pay tribute to British Folk sound.

The final track, The Fifth Season, a 7-minute dramatic yet sinister introduction done by Piano, Floyd-esque guitar sound, and drums set up the scene as if it’s a murder investigation. Then comes the spoken-word narration before the vocals come in and Albert’s twilight zone synth’s come into the picture for the first 4-minutes before the upbeat sound comes in like driving through the speed limit as Albert comes in for the keyboard passages while Marc’s drumming follows him as Mario’s screeching vocals comes back in as Machiavel’s sing to the soaring sky for a lukewarm ending.

Of course, Machiavel started to decline with the pop sound after the release of Mechanical Moonbeams in 1978, surprising the critics and the music lovers since forming in 1974, packing the symphonic sounds from the 5-piece band that could have been the next Genesis. And while Albert had passed away in 2004, the music and the band might give us a question to plead with them to back to their roots of the first three albums and make it sound like it’s 1976 all over again. Mechanical Moonbeams is a wonderful lost gem of the European Progressive Rock sound of the ‘70s. Give Esoteric Recordings a round of applause for the reissue they worked on.
Posted by znathanson at 3:52 AM