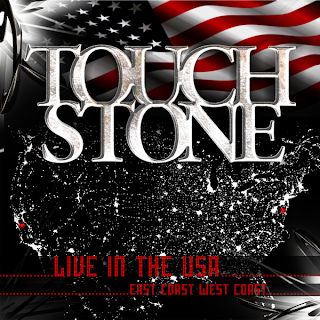 It’s always considered that some fellow record collector’s always prefer the live versions of the song on the album instead of the studio version. There are perfect examples like: Cheap Trick’s Live At Budokan, The Who’s Live at Leeds, Rush’s All The World’s a Stage, UFO’s Strangers in the Night, and Pink Floyd’s Is There Anybody Out There: The Wall Live 1980-1981. Now with Touchstone, we got to give them a huge amount of credit for doing this. This 2-CD set was recorded back in 2009 at the time the band was promoting their second album, Wintercoast and performing at two small auditorium shows. One in Philadelphia (RoSfest) in the East and California (CalProg) in the West, the band shows no sign of stopping.

It is very exciting to hear Touchstone live from beginning to end, but it shows why the band not only are giving the audience a surprising reaction and mind-blowing experience in what you are about to hear, but also seeing the direction they are going through as this was drummer’s Alasdair Melville’s last performance with the band before departing back in 2010. This is also an emotional farewell for Alasdair as he gives in the live recording a heartfelt performance on the drums on both discs while Kim Seviour, who has filled in the space of Liz, isn’t just a leader of the gang, but she and Rob along with the band members work together as a team.

The arena rock flavor is back in the table from the flourishing keyboards of Rob Cottingham, bassist Paul Moorghen, and Prog’s answer to Eddie Van Halen meets Robert Fripp, guitarist Adam Hodgson. They built a strong force that puts progressive rock mixing it up with stadium rock in the atmosphere which makes Touchstone the new kings and queens of the 21st century of the revival of Arena Stadium Rock. Not to mention opening last year’s performance at Classic Rock’s High Voltage festival. On Live in the USA, which is a flaming experience, and gives the band members to break free, they’re not here to show off.

Rob Cottingham’s keyboards brings a whooshing magic carpet experience to bring prog rock back from the dead while Hodgson’s guitar shreds like a razor blade through various time changes and Alasdair’s drumming is in the realm of Jazz and Hard Rock. Like Neil Peart meets Billy Cobham, he gives the energy fuel a huge run at over 600 miles per hour. It’s very vivid in where the live recordings fit the atmosphere inside the auditorium to a huge extraction. When you hear the live versions of the tracks, you never know what to expect. You have the explosive ‘80s hard rock punch of New Prog the blazing version of Strange Days, the mini-rock opera to Alice in Wonderland on The Mad Hatter’s Song, lukewarm ballads of: Voices and Solace, and the resemblance of Power Metal on the two part-epic, Discordant Dreams / The Beggar’s Song, that shows they are going for a roller-coaster ride that the crowd will never forget.

Kim’s voice is unbelievable. She’s really changed a lot since Discordant Dreams back in 2007. She isn’t trying to be center of attention, nor being a rock star like Jim Morrison, she is almost like a conductor that brings her vocals and conducting the band to follow her where her voice and the time signatures might change, where to stop, and knows that she roots for the band members as if they are behind her all the way. And adding a guest musician like guitarist John Mitchell, you got yourself a huge weekend. John pays a huge homage to Alex Lifeson’s guitar playing on the explosive cover of Tears for Fears view of the destructive post-apocalyptic hit single, Mad World. It sounds almost as if Rush could have used this track for the Moving Pictures and Permanent Waves sessions, but it packs a mean punch.

Like I’ve mentioned before, Touchstone are the next Rush, this is one hell of a double live album and shows the band shining through the high heavens. Let’s see what they have up their sleeve for the third album.
Posted by znathanson at 3:15 AM