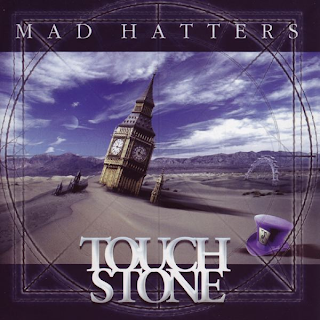 It seems that Touchstone are now ready for the big Arena’s now thanks to their performance on the Prog Stage at High Voltage last year and I think they are getting the achievement they finally deserve and let everyone know that Arena Rock is not dead. Now just before Kim Seviour and Alasdair Melville joined the band, there was Liz Clayden and Simon Cook in the original EP, and this is their only debut before departing for other projects. Mad Hatters EP is a well-made product that the band would give before becoming what they are today.

Sure it sounds interesting and Liz’s voice sounds almost like Kim, but this is worth checking out and seeing how the evidence is in the music, not in the pudding. Misguided Fool starts off with a shofarish sound on the keyboards done by Rob Cottingham that is similar to Supersister’s Iskander album before going straight into a New Age atmospheric landscape and then goes into power metal territory. Interesting when you find out the moody synth sets is what you’d expect from Touchstone while the vocalization done by Liz and Roy really carry the lifting weights in the album before going straight into the Eddie Van Halen-sque sound to erupt with a mighty bang.

One Shot is a very interesting track. At times it sounds like a modern version of Pink Floyd’s A Momentary Lapse of Reason meets Triumph’s Allied Forces, but it’s very pointed directly ahead into the Album Orientated Rock sound of the late ‘70 and early ‘80s format. You can hear Adam Hodgson doing a Neal Schon and Tommy Shaw guitar solo in the last few minutes of track as he lays it out for the drums, bass, and synth to have a Journey meets Styx sound to give it a metallic beauty of the Pomp Rock genre.

Hear Me calms the music down as it’s back to the late ‘80s-era of Floyd as Cottingham does an atmospheric introduction on his keyboards as Adam does some Gilmour-sque layered sound on his guitar. There’s a bit of The Division Bell elements in there as if they written this as a sequel to Take It Back and Keep Talking as if David was watching these guys and giving the torch to them and letting them know, it’s your turn to take the music of Floyd to the next level. And then we get into the last track, The Mad Hatter’s Song.

The Mad Hatter’s Song, you could tell that the band pay homage to Lewis Carroll’s Alice series as if it was written for a concept album of Alice in Wonderland. It starts off with a nightmarish lullaby introduction that is very creepy and disturbing as the guitar and keyboard kick it in into overdrive work as in the format of the ‘70s band, Boston. The vocals and the piano is a good notch to the Mad Hatter’s insanity as if Roy and Liz were doing a duet with each other. In the midsection, there is a child-like atmosphere as if Alice is back in Wonderland and seeing that the place she went to as a young girl has now become a dystopian world as the Red Queen is in tears and couldn’t believe what the hell has happened.

Mind you, Lewis Carroll would jump for joy with the 8-minute epic. The last 2-minutes is Liz Clayden’s moment to shine in her vocalization as guitar, drums and the sound of the mellotron gives a building edge and lets Liz give her a real sound as she goes into the instrumental-esque background as the band go into Rush’s homage to the 2112 overture for the stop and go moment before Liz gets back into gear and finishes the song off with a cannonball explosion. It’s a real powerhouse anthem and it gets your blood flowing to see where the band would go into the Prog Arena Rock format. This is some amazing stuff that every prog listener needs to get and you have to buy this and see if Touchstone could be the next Rush.
Posted by znathanson at 7:58 PM