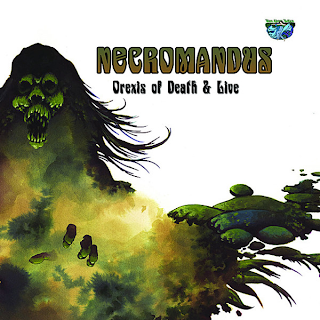 Its unearthed gems that tell the story of a band that would have become the next Black Sabbath in the early beginnings of heavy metal. While the band gave birth to the genre, there were bands that followed in the footsteps of the doom metal heroes. You have Iron Claw, Truth & Janey, Buffalo, Jerusalem, and Necromandus. Now the question remains, who are Necromandus? Well here’s the real story about them. The story of Necromandus goes back into the late ‘60s where Sabbath members Tony Iommi and Bill Ward were a part of the Cumbria circuit where they were a Blues Rock band under the name, Mythology.

Cumbria is located in North West side of England and is the largest county in England throughout the council way in the Scottish area between Dumfries and Gumfrey in the west North Village Sea. Now back to the story of Necromandus, after Mythology broke up and Earth was formed while later becoming of what would become Black Sabbath, Tony was impressed of the band was doing and he offered to get them a record deal with Vertigo and manage the group as a way to help them out. The band released their only album in 1973 as Iommi made a guest appearance on the album. But that would not happen.

Due to Touring conflicts and bad timing, Iommi went on tour as the band fell apart and the album was shelved from Vertigo never seeing the light at the end of tunnel. Cut to 37 years later when Lee Dorrian, member of Napalm Death and founder of Rise Above Relics and Rise Above Records, the independent record label of unearthed progressive music, folk, and heavy metal, decided that it was time for the album to give it the green light that it deserves. The influences of Doom and early Progressive Metal can be heard in this. The album, Orexis of Death is the 1970’s underground favorite of early hard rock, a combination of Possessed’s Exploration meets Wishbone Ash’s Argus.

The spooky atmospheric acoustic gong hammer on low fret-by-fret intro on Mogidismo Part I, is very disturbing as it goes straight into the high voltage power force of Nightjar as the guitar goes into a vicious mode with its raw and fierce momentum by guitar, bass, and drums doing a stop and go section. As the guitar comes up with a violent riff, the drums and bass go in for a bullet attack mode that sounds like a gunshot almost as if they are at the O.K. Corral to see who go down in a blaze at glory at High Noon. You can tell that they are not fooling around with this as if they are the right band to come up with some excellent ideas while working on the song.

Then the band go into the psychedelic rock element of space with A Black Solitude that gives the band a chance to cool down with a touch of acoustic beauty that guitarist Barry Dunnery would create almost as if they had written the song that could have been a sequel to Black Sabbath moody Planet Caravan. No wonder Steve Howe of Yes got a real kick out of Barry’s guitar work as he would do a tribute to him during his career with the band. Then you have the same element in the jazz groove rhythm influence on Homicidal Psychopath giving the track a real prog influential backdrop while Stillborn Beauty is a roaring waltz hard rock explosive power.

The 6-minute Gypsy Dancer comes in with a mystical guitar work that Barry does that is almost a reflective vision of edged magnitude. Then in the midsection, he creates some unbelievable framework solos while the band follow him including the only surviving member of the band, drummer Frank Hall creates a Bill Ward meets Nick Mason drumming sound that could afford a touch of trip to the Milky Way for the last 48-seconds. The title track touches a shuffle prog metallic power as if Uriah Heep and Van Der Graaf Generator worked together to create a twisted an anthem adventure which brings the rhythm section into a drive down the highway with screaming vocals and a touch of the blues influence, hell, you got yourself a weekend as the second part finale of Mogidism closes the reprise with the hammer fret-on-fret to give it a ghostly and haunted mourning acoustic fingerpicking in the style of virtuoso guitarist Steve Hackett. But wait that’s not all!

You thought the album was done, well guess again. There are eight bonus tracks recorded live at Blackpool Casino in 1973 as they were promoting the never released album for Vertigo. This is a rare recording, even though it’s a B+ quality, it’s interesting to hear this perform in front of the audience that were headbanging or gambling their money to hit the jackpot. There’s the homage to Iggy & The Stooges in a unreleased live version of Judy Green Rocket that would have you throw away your Glam Metal shit away as Still Born Beauty which neatly carries the ¾ time signature as if John Coltrane wrote a heavy metal version of My Favorite Things as if it was done by Budgie.

And the 6-minute super hero rocker that would have Stan Lee bowed to his knees on with the elements of Sabbath into the mix of Limpet Man as the five tracks that appeared on the never-before-released album still packs a punch and ruled the casino live to kick a shitload of ass onstage. You could tell why Tony Iommi was so impressed and was very pleased on what he was hearing. He knows his Heavy Metal history so well by the time you hear this. This is unearthed music like you’ve never heard it before and would give Tony and Lee a big pat on the back. Now let’s hope that Rise Above releases the unearthed Earth demoes and bringing unsung hard rock back from the grave.
Posted by znathanson at 5:50 PM