Steve Hackett - Voyage of the Acolyte 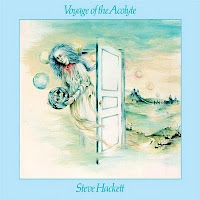 When you listen to this album, originally released in 1975, you could tell that since Genesis released The Lamb Lies Down on Broadway, Steve Hackett wanted to move away from the Genesis sound into a crystal avant-garde jazz fusion beauty that were at times instrumental, ambient, and lyrical boundaries that he was about to embark on a virtuoso journey. More surprisingly though, it would be the flowing river in which Voyage of the Acolyte (which was named after a Tarot Card) an album that embarked on the Floyd’s Ummagumma sessions with such magnitude that it could have been recorded by The Mahavishnu Orchestra – with a little help from vocals done by Phil Collins and Mike Oldfield’s sister, Sally and of course Steve Hackett himself to the mix – it is a perfect combination for Hackett’s compositions to be put to the test in his career with Genesis that he put to the table from Nursery Cryme to Wind & Wuthering. Amazingly, he wrote the music and the lyrics that are absolutely magnificently beautiful.
The evidence is here; classical, eerie, weird, time changing signatures, the fast guitar sounds of the Hackett’s playing, pastoral settings in an English Country Garden, emotional flows, and some of the best musical arrangements in some of Genesis hot cup of tea. The weirdness of the mind-boggling synth and explosive sinister soundings of A Tower Struck Down that makes it sound like a B-Movie picture set to an epic soundtrack while Hackett’s vocal debut on the fantasy folksy atmosphere of The Hermit sounds a little interesting with the acoustical overtones of Mike Oldfield’s Hergest Ridge. From the roaring opening of Ace of Wands, you’d have a bit of the Fusion sound gone haywire through Phil Collins shining vocals on Star of Sirius to the two-part segue Hands of the Priestess which has the prog classical touching overtones featuring Steve’s young brother John on Flute that gives it a Medieval storytelling in a mellotron way as he gives his brother a chance to shine.
The Lovers could have been a sequel to Hackett’s composition Horizons as Steve finger picks on the classical guitar to set a moody background in the sunset as it gets ready for the 11-minute epic, Shadow of the Hierophant. This is an Ambient Atmospheric beauty featuring Sally Oldfield’s angelic eerie vocals in which she is almost singing this in an enchanted forest as if she is the Last Unicorn singing to the outside world as if it were a musical done by Genesis. After she’s gives her beautiful singing, it’s Steve’s turn to take the band to a new Dimension with his guitar work as he works up like a thunderstorm as an homage to Robert Fripp’s Frippertronics or shall I say Hackettophonics by using pedals to give it that haunting moments on the chords and solo.
The two bonus tracks feature a gorgeous pastoral live version of Ace of Wands in Drury Lane while the extended 17-minute version of the closing number, Shadow of the Hierophant is more of Steve’s guitar work as if it was almost used for the Lamb sessions as he goes for more his compositions and his fretwork to show how damn good he really is. In reality, this is a must have for early Genesis fans and Prog Geeks to sink their claws into, which fans always prefer Hackett rather than ‘80s sounding version of Genesis
Posted by znathanson at 1:08 AM