Atomic Rooster - Death Walks Behind You 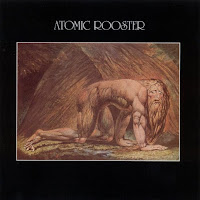 From the beginning, Atomic Rooster embarked a metallic ride of heavy metal, blues, and jazz. But since forming in 1969 and different line-ups including Carl Palmer who left the band to pursue a prog supergroup with ELP and adding drummer Paul Hammond and guitarist/lead vocalist John Du Cann were born to blow out the roofs off. The second mark of Atomic Rooster was explosive with dynamic guitar solos, shattering organ solos done by the late Vincent Crane, and powerful drumming with a high voltage charge.
Atomic Rooster’s music was now trying to following in the footsteps of Black Sabbath and Deep Purple, rather than the bluesy rock sound of Cream. Death Walks Behind You became the first album to be released in the States to try receive a following in America. And while it is the archetype of the Atomic Rooster sound and the essential classic album that is aggressive and sinister, the band almost sounded like they recorded this album in a dark Castle somewhere in the countryside of Wales.
Du Hann’s guitar and vocal arrangements is in the mind of Ian Gillan meets Tony Iommi meets Ritchie Blackmore, has definitely intellectually worked with organist Vincent Crane as if they were battling brothers to be a twister and fight to the duel to see who will win as Paul Hammond follows them into the battlefield with his fast-sped drumming to create a pounding and firework composition. The trio played their hearts out as if they performed the album like a horror film score: the dooming opening titled-track begins with Vincent’s eerie piano introduction and then the shrieking guitar sound from John adds to the fire – Jesus Christ! How fucking cool can an introduction be? – More devilish and very much into the hard rock composition as it the pre-sound of early Satanic Metal.
A speeding instrumental blues rock VUG stays on the forces of the rumbling powers of hell while the hit single, Tomorrow Night, which had a huge success in the UK, explores on the catchy tempo with a driven beat that is forceful and nightmarish of magnet metal. But the band’s touch of the beginnings of the Metallic boundaries and power is the real touch. Get your head into the air as if you can imagine Deep Purple’s Child in Time and Black Sabbath’s Wicked World had been remodeled and rebuilt into an uncharted shock of territory with Seven Lonely Streets as with Sleeping For Years which starts as Du Cann’s guitar going haywire as it leads into a twisted feedback-like guitar solo intro ala Blackmore style as it goes into the power rock sound as Vincent flourishes madly on the organ as he and Du Cann go at it to see who can win the race to this thorn-like collaboration.
When you hear I Can’t Take No More, the band is almost sounding like Budge meets Golden Earring as they make it very much giving the Motorcycle anthem songs the middle finger, this is the anti-motorcycle anthem that is again rumbling and at the same showing the material that is not pompous, but connected with Crane’s visual mind. Nobody Else is their attempt to do a jazz speeding funk while the 7-minute homage to Jon Lord closer on Greshatzer, which features Hammond taking over in the midsection as if he’s John Bonham stealing the show to close the album. Like the rest of Heavy Prog, it plays like the soundtrack to the horror video game of the year of 2008, Dead Space.
Posted by znathanson at 7:02 PM