Pink Floyd - Dark Side of the Moon 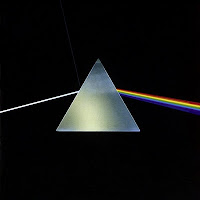 It’s impossible to say why Dark Side of the Moon is one of the most landmark albums of the 20th century. Everything about the album is unbelievable from the concept on dealing to live in the modern world, greed, death, war, suffering a nervous breakdown, and the afterlife. To it’s surround sound of layered ambient beauty and amazing sound effects that sets the whole tone of the album while skyrocketing to the Billboard charts at number one for 741 weeks which is a world record and still counting to this day.
Pink Floyd has spent so long going from the psychedelic pop sound to being Sonic space cadets in compositions such as; Atom Heart Mother, Interstellar Overdrive, A Saucerful of Secrets, and the live version of Embryo, but they decided they had done enough of that. They knew they couldn’t be in the same competition with ELP and Genesis as they were doing Fairy Tale story lyrics and flourishing prog magnetism, but they pay attention to the music rather than superstardom. After releasing Meddle in 1971 with the 23-minute epic, Echoes, it was up to them they had found their niche.
What they found would have a huge change in the Band’s direction, turning them into mainstream superstars and their relationship that would change the way they played music. From the dramatic opening of Speak To Me/Breathe with the heartbeat and a psychopathic Scottish voice saying “I’ve been mad for fucking years” the helicopters covering the sky and the angelic female vocals done by Clare Torry all lead up to the smooth introduction. They also became experimental by using the VCS3 by creating a rapid motion about traveling with On The Run as it segues into the explosive beauty of Time with the chiming clocks and you can tell they never missed a beat.
During Time, they go into the Solar system as Gilmour’s guitar solo just takes your breath away as a futuristic cleverness of the 21st century while the mourning and the sweet nature of The Great Gig in the Sky which has the glorious Clare Torry just coming up with amazing vocalization as the band just follows her goes from a hymn to rapturous ecstasy. The 7/8 time signature of the blues from the inspiration of the bass lick into the midsection which features the jazzy sax solo and the funky 4/4 sound by the wah-wah keyboard and Gilmour’s guitar breaking the door down into a surprising ending which would make it a hit single in the states which seemed impossible, but it worked. Us and Them deals with struggles for this unbelievable ballad with Rick Wright’s piano playing that sets the tone throughout the number as he comes up with some amazing compositions as an homage to Miles Davis.
But that’s not all. Any Colour You Like is a psychedelic instrumental jam beat as the piece deals with you can be anyone you want to be as long if it’s black which has the sharp guitar and keyboard work as Gilmour and Wright come up with some beauty as we go into the afterlife of the magnum opus of Brain Damage/Eclipse as it is a memorial to Syd Barrett as Roger sings the line “The Lunatic is on the Grass” and then Eclipse is a church-like epilogue as the heartbeat closes the piece with “There is no Dark Side of the Moon really, matter of fact it’s all dark.”
And still 37 years later, Dark Side remains one of the most quintessential Progressive Rock albums of all time; masterpiece, suites, successful, and ambitious. Even to this day, there is a 10-year old kid listening to Pink Floyd’s music for the first time as he embarks on a journey he’ll never forget.
Posted by znathanson at 12:50 AM