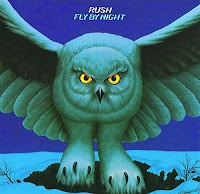 This is another special edition review because I’m going to go see the much anticipated documentary, Rush Beyond the Lighted Stage on Tuesday at the Studio Movie Grill. After original drummer John Rutsey left the band in 1974 due to health problems after the release of their self-titled debut album, Rush knew they needed another drummer. They soon held auditions to replace Rutsey, enter Neil Peart. When he came in to audition, he blew Geddy and Alex away, but he felt that he blew it. He was wrong
He was now the drummer and lyricist of Rush as he made his debut with their second album, Fly By Night. With the second debut, this was the first time that Rush was moving away from the blues heavy metal sounds of the first album into the beginnings of Progressive Metal territory with lyrical backgrounds that showed a different background that wasn’t shown in the debut album. Fly By Night was recorded in Toronto by using 16-track master tapes that would allow the band to have creative freedom and total power in dubbing and mixing in different guitar parts and drum beats. And it was also the first time it was produced by Englishmen Terry Brown until Signals in 1982.
Alex Lifeson’s guitar work sounds very aggressive and Zeppelin meets Steve Hackett-like, Neil “The Professor” Peart, fresh from working in his father’s tractor tool shop, creates an explosive base on the drumkit like a torpedo flying out of nowhere and exploding while Geddy Lee’s bass work and vocals soar to the heavens. The trio who were following in the footsteps of Hendrix, Cream, and Blue Cheer, played as if they recorded it in an English Cottage that was ‘eavy and ‘umble: the roaring opening of Anthem in which is a tribute to controversial author, Ayn Rand, does guitar solos kicks ass or what? Featuring Geddy’s vocals sound like a volcano eruption, Alex’s heavy metal sneering guitar work that is magnificent as Neil’s power pounding drumming composition.
Best I Can sounds like early Judas Priest and the 8-minute epic of dueling guitar turned atmosphere and back into the block of war between By-Tor and the Snow Dog stay on the edge of their Hard Rock roots of British music coming from Great Britain as Alex takes the center stage with his shattering guitar work to have audience in awe of what he’s doing in ala Jimmy Page meets Pete Townshend style. Beneath, Between, and Behind has a raw and melodic pomp rock sound that has glorified chorus and energetic at the same time as they go should I say power pop meets melodic hardness with the title track that has become a radio favorite.
The band then go acoustic all of a sudden in the final three tracks, which is cool if you want to perform it at Tolkien’s birthday party or at an English Country Garden with energy. The acoustic homage to Zeppelin’s III sounds almost like an on the road song with Making Memories while the ambient/atmospheric tribute to Lord of the Rings, Rivendell, sounds very folksy and crisp of beauty. In The End, a 6-minute emotional heartfelt ballad turned Led Zeppelin influential rocker that could have been used in the Physical Graffiti sessions. Fly By Night is energetic and they mean it and that’s why they are one the most cult bands that rocked to their loyal fan base and delighting what they have up their sleeves.
Posted by znathanson at 9:03 PM