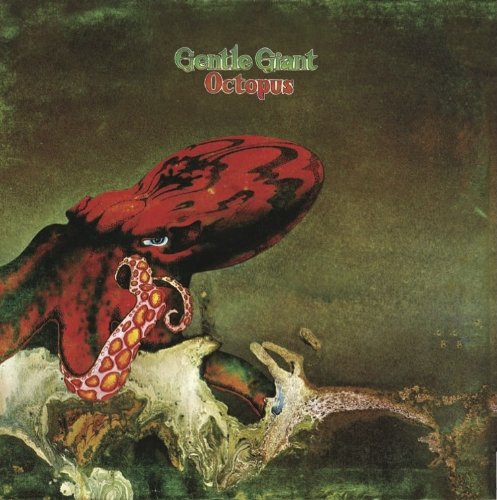 Gentle Giant really got the ball rolling with the release of their fourth album, Octopus, released in 1972 on the Vertigo label in the UK and on Columbia Records in the States and reissued in 2011 from the Alucard label, this was where the time of the group to go into a harder approach, but staying true to the difficult time signatures to follow as well in their music from their first three albums. But it was also the last album to feature older brother Phil Shulman as he grew tired of being on the road and missing his family and tension between Derek and Ray, was growing and then after the tour was completed, he would soon leave and the band would later be a quintet throughout the rest of their career.

But with the arrival of drummer John Weathers, who was a part of bands/artists like Eyes of Blue (Bluebell Wood), Pete Brown & Piblokto, and the late great yet overlooked keyboardist, Graham Bond, everything started to come into place right here. The opening track, The Advent of Panurge is a perfect way to kick the album off with a bang as Kerry’s keyboards and Gary’s guitar along with John’s drumming sets the tempo as they set the different time changes going before Derek’s voice comes right in and it’s a powerful improvisation between the character and his friend, Pantagruel.

Then the band switch the harder edge sound into a Medieval-Renaissance vibe and a little nod to Elgar’s classical compositions in the piece, makes it an astounding touch for them to pay tribute to the composer while A Cry for Everyone, goes back into the hard rock sounds comes right back in with the story about Albert Camus, who was a philosopher, wrote an essay called The Rebel in 1951 in which it dealt with the opposing view of nihilism. Elsewhere, the musical jigsaw of acapella vocals combined with chamber rock at times with the avant-garde twist is surreal, but mind-boggling touch for them to have a blast on their tribute to psychiatrist R.D. Laing’s view of psychosis on Knots.

The Boys in the Band begins with engineer Martin Rushent's laughter and the coin spinning to the floor before the intensity improvisation comes kicking in like a cannonball going off as the complex movement goes in as Kerry Minnear shines through his keyboards and Phil Shulman’s horns, Gary Green’s Guitar, Ray’s Bass, and Weather’s drumming fill in to have the touch of Jazz Fusion. Minnear is going through in the midsection in the styles of Herbie Hancock and David Sancious for a couple of seconds before closing into the climax ending.

Gentle Giant show their softer side with the ballad on the moody composition on the love that the people have is gone, but their memories is sorrow and showing no sign of tomorrow with an emotional vibe and Minnear just sings so beautifully with the soothing Think of Me with Kindness. They also go back into the Medieval side as well as a tribute to their roadies who have been on the road with the band with an acoustic folk touch as Phil takes on the vocals that he is singing and its almost like an homage to Gryphon on Dog’s Life.

The closer, River, is the band creating different boundaries mixing with Ray’s Electric Violin and Gary Green’s Guitar playing the melody in the moments the band would stop and go. And adding the electronic noises of the spooky vibe with Ray and Derek sharing vocals in that midsection, and the thunderous Weathers just nailing on the solo on the drums and Green’s bluesy solo, it goes to show how much they can take it as a whole to close it off with elements of the Jazz sound.

The bonus track and the 6-page booklet, which is on their 2011 reissue from the Alucard label, is their live performance of Excerpts of songs from Octopus they performed at the Calderone Theater on July 3rd, 1976 in Hempstead, New York in which they were promoting their eight album, Interview. Listening to the live performance during the Bicentennial celebration, you could imagine and feel that you are at the concert being blown away of the band and just rooting and cheering for them to imagine what they would do next unexpected time movements and get the audience’s stamp of approval.

The booklet features pictures of the band and talking about making the album and promo material at the time it was being released. Fans consider it at their peak and one of their finest albums to date. It is an integrated yet a mind-blowing album from start to finish for any fan of the Prog genre to really sink into their works. And if anyone who is a starter of Gentle Giant's music, this is a highly recommendation to get you started because it has everything inside the album; Chamber, Classical, Jazz, Folk, Hard Rock, and the Blues rolled into one.
Posted by znathanson at 6:36 PM