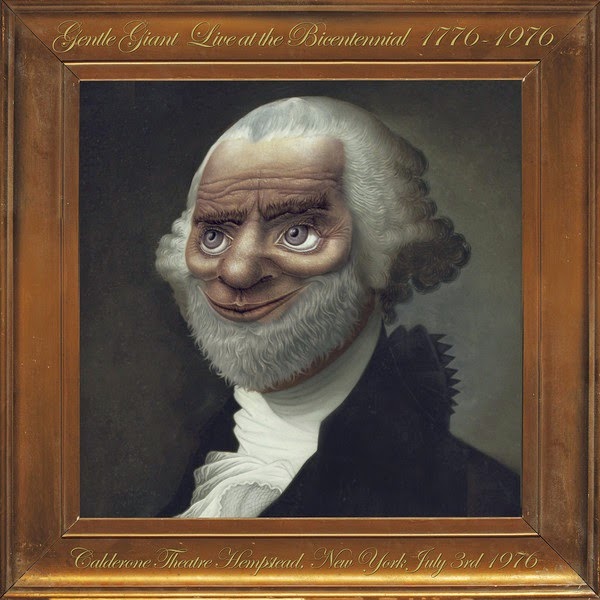 It is hard to imagine that Gentle Giant is often overlooked in the Progressive Rock genre. They were one of the bands that took the sounds of; Medieval, Chamber, Classical, Baroque, and Jazz rolled into one and they never disappoint me. I first heard their music back in 2002 when I was entering my Junior year and being blown away of the unexpected time signatures and how they took it into a whole new level of how they would take Progressive Rock into unbelievable results that had my jaw dropped at times hearing their music.

That and their 2-CD set of a live performance at the Calderone Theatre in Hempstead, New York for the Bicentennial celebration in which the band performed on July 3rd, 1976 on the eve of America’s 200th Birthday. The band at the time was on tour promoting their eighth album, Interview and it was recorded that night for a local radio station, WLIR in Long Island. From the moment you put it on, you can close your eyes and imagine that you are at the concert and witnessing an impressive yet mind-blowing performance of Gentle Giant giving a 100% to get the audience blown away out of their seats, enjoying a wonderful night and a moment they’ll never forget.

There are no overdubs, no enhanced sound, this is the real deal. Raw, energetic, thunderous, and powerful, Gentle Giant have scored a knockout at the Calderone and not to mention the four highlights on here. With the audience cheering and Kerry’s swirling and renaissance moog-like fanfare introduction before getting into an eruptive version of Just The Same and into the seguing of Proclamation/Valedictory.

By the intense drumming of John Weathers, Gary Green’s guitar taking into unbelievable results of riffs and Zappa-like touches, and Ray Shulman’s homage to Yes' Chris Squire on the Bass lends a helping hand along with the hard rock sounds and climatic heights as if something is about to happen as the band go into the track and reprising the piece of the dystopian society of how everything in power has to stay and rearrange.

They also have a lot of improvisations in their solos. And the evidence is shown on the 12-minute take of the soothing yet eruptive take of So Sincere. On the track, after Gary Green's sublime solo and Minnear's clavinet leading the way, they head onto their percussion instruments. And between Weathers, Green, and Minnear, they began to create some dynamics, intensity, and the xylophones to come in that is almost like a lullaby and at times a tribute to Italian Prog maestros Goblin, they get back into the beat and its very much like Taiko and Pow-Pow drumming at times to create the powerful vibes and increasing the level for the climax.

But it’s Timing that is the real kicker. You can imagine Derek soaring through his vocals and also giving his brother Ray a chance to shine through his violin as if he is paying tribute to Jerry Goodman, Jean-Luc Ponty and Darryl Way of Curved Air throughout using the wah-wah pedal to create the fusion vibes as the band go into the sounds of Jazz Rock and they give Ray the spotlight to do some amazing solo's and creative ideas on his instrument as the audience cheers him along to keep going and see where he would go next.

And then he uses the delay/reverb effect as if it’s echoing inside the Theatre and he goes into the sound of the Irish jig by enlarging the beats when he stops and go’s on the solo. Audiences cheer and shout to get the vibes as they clap into the rhythm and Ray goes into the Roud Folk sounds of Three Blind Mice as the effects is filling the halls of the echoing beats and he does a finale in a classical touch before a drum roll on the snare and seguing into a magnetic stunning version of Free Hand.


Unfortunately, after Free Hand, that’s all that’s left because the tape stops right there. According to the notes, they did three encores that included; Peel The Paint, I Lost My Head, and their take of Wilson Pickett’s In The Midnight Hour and singing Happy Birthday to the United States. It would have been great to hear those including their tribute to Pickett, but this is a rare and special treat of finding unearthed treasure of Gentle Giant's music.

Alongside the performances including Excerpts from Octopus, the Medieval turned difficult signatures of taking turns on vocals from On Reflection, and as Derek says "Bob Marley meets Gentle Giant somewhere across the Atlantic Ocean" on the Reggae-vibes on Give It Back to name a few, are radiant, humor, and moving at the same time. I have listened to Live at the Bicentennial 1776-1976 about nine times now and its like going back in a time machine to witness the band's exhilarating performance and turning the volume knobs up a notch to a sound of wonder you will experience. This is a must have for any fan of Progressive Rock and Gentle Giant.
Posted by znathanson at 6:00 PM

You should check out the band "Three Friends" on Youtube.
It has Gentle Giant alumni in the line up. Malcolm Mortimore and Gary Green. I think even Kerry Minnear played with them a couple of times.