Blackmore's Night - Dancer and the Moon 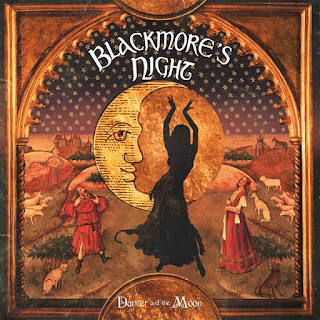 Now here’s something you don’t see or hear everyday. Touches of Renaissance Music mixed in with Folk Rock and Medieval fairy tales rolled up into one and add Ritchie Blackmore of Deep Purple and Rainbow along with his wife Candice Night, you’ve got yourself a wonderful bliss of enjoyment with sing-along songs, dancing into the night, it’s a brilliant combination of the mind of Blackmore’s Night.

The husband-and-wife duo has been around since forming in 1997 and they started performing in festivals in the Renaissance circuit and Castles in different parts in Europe and receiving cult status. They have released seven albums along with two live ones and a holiday release as well, and with their new album, Dancer and the Moon, is more of a spiritual journey and an exciting experience with a lot of textures and fantasy to make it an amazing adventure from start to finish.

Alongside the three covers from a folky chugging version take of Randy Newman’s I Think It’s Going to Rain Today, an electronic rock dance like versions of Uriah Heep’s Lady in Black and the mellowing Celtic lukewarm crisp of Rainbow’s Temple of the King, You have the stomping movements to get you ready for the party as Candice’s voice takes you into different areas with Troika in which it means ‘a set of three’ in Russian.

It begins with Ritchie playing a classical guitar introduction and Candice singing about the scenery with a lot of story-telling narration before it becomes a joyous experience to make stomp your feet and clap your hands to get you into a happy mood.  Then they do the stomping mode again on the title track, which you can imagine being played during your Bar/Bat Mitzvah party for a traditional Israeli folk-dancing with thunderous percussion, clapping, guitar, and vocals to have the night of your life.

Then, you have a relaxation and calming structures as Candice calms from her enjoyment to go into this wonderous balladry scenery on the soft turned orchestral string quartet beauty and pennywhistles setting the atmosphere with The Last Leaf, The Spinner’s Tale and the dazzling Somewhere Over the Sea (The Moon is Shining) while The Ashgrove pays homage to the obscure acid folk brother-sister duo, The Sallyangie that featured Mike and Sally Oldfield and it almost feels as if it was written during the sessions for Children of the Sun.

Then they are back into the Electro mode turned Power Metal with The Moon is Shining (Somewhere Over the Sea). At first it begins with a new wave ‘80s synth for a couple of minutes done by Blackmore’s ambient guitar lines and Cadence’s echoing vocalization before going into full gear. Not to mention the Church Organ, Metallic Riffs and Primitive tales to get your jaws dropped with exciting momentum.

While Candice’s voice sends a shiver down the listener’s side myself included, it’s Ritchie Blackmore who takes control on three instrumental compositions. There’s Minstrels in the Hall, which has this Bach-sque homage to Bouree as he does this concerto acoustic lukewarm touch with virtuosity to show he’s still got it.  The symphonic waltz Galliard has this 3/4 time signature that is laid-back and yet it has the orchestral flavor that makes it very special as the closing and emotional track, Carry On…Jon is dedicated to the late great organist of Deep Purple, Jon Lord who passed away last year.

Ritchie carries the spirit of the Purple sound as his guitar is in tears and emotion through the loss of Lord’s amazing talents. There’s a lot of the ‘70s Rock feel with a bit of Hard Rock, Soul, Bluesy, and Gilmour-sque structures that Blackmore is playing and hearing the homage to Jon’s sound of the Organ in the background and the symphonic sounds shows that he is watching over.

I have listened to Dancer and the Moon about seven times already and I’m hooked into Blackmore Night’s music. And while this is my introduction to the band’s music, they are really something. So if you love Medieval Folk Rock music, this is a must have album for this year.
Posted by znathanson at 10:53 PM