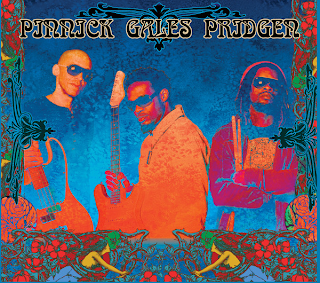 When you think of a supergroup, you think of; ELP, Bad Company, Cream, CSNY, and Ginger Baker’s Air Force, you know you are going into some amazing music that will take you by surprise from artists who had been in various bands whom people known and love. But if it’s an African-American power trio that are in the realms of the Jimi Hendrix Experience, there is absolute magic coming from three members who really take the score of Blues, Prog, and Hard Rock into a different area in a whole new level.

Pinnick Gales Pridgen (PGP to be more precise) is bassist dUg Pinnick of King’s X, guitarist Eric Gales of the Eric Gales Band and worked with Lauryn Hill, and drummer Thomas Pridgen of The Mars Volta, have released their first sole self-titled debut album, three musicians have released a powerful yet volcanic eruption and its worth the trip to unbelievable results. You have Pinnick with a thunderous bass work and takes it to the street while Eric Gales who had been around since the ‘80s as a child prodigy, he is an outstanding guitarist by taking the blues and metal in the style of Stevie Ray Vaughan, Kirk Hammett, and his hero Jimi Hendrix into a wowing reception.

Then, there’s Thomas Pridgen, whose drumming is a wildly improvisation with a fast and killing tempo that almost sounds like a machine gun reigning rapid fire, he knows the score with Jazz and Harder edge to it in the realms of Keith Moon, Lars Ulrich, and Billy Cobham. There are thirteen tracks on the album and right from the beginning, middle, and the end, you begin to realize that this is a roller-coaster ride that you’ll never forget and enduring six centerpieces here.

Opener, Collateral Damage, is a crunchy and explosive starter to kick the album off. Featuring heavy riffs and lead guitar driven lines along with energetic drum work and Pinnick and Gales vocals taking center as they share the microphone on the chorus before Gales himself goes into a punchy yet dazzling guitar solo and at times it feels like something straight out of the sessions for Lenny Kravitz’s Let Love Rule, but it has a real eruptive introduction that could be used to start the NASCAR race.

The tuned-down cover version of Cream’s Sunshine Of Your Love has this haunting yet punchy doom metal vibe as if Black Sabbath had covered it back in 1970, but what PGP has done, is they stay true to the original version that it was meant to be with attitude, fierce, and in your face while they show how much PGP admired the trio that have carried the influential sounds in their blood of the Heavy Blues sound. Hang On, Big Brother is a driven adventure as the band goes straight into town with ‘70s Soul and Metal with a hard-hitting roar thanks Gales and Pridgen going almost like a duel between Guitar solo and drum work while the moody and sinister attitude on Black Jeans has this tour de force unique homage of Tool’s Undertow-era meets King Crimson’s Red-era.

Angels and Aliens becomes this hypnotic spacey adventure as Gales gets a moment to shine in which he Pinnick and Pridge help him out as he goes from rhythm into lead guitar work from solar system voyage to a soaring tempo to get the juice flowing with a psychedelia-metallic feel. The Greatest Love has a catchy funk-rock vibe between the riff mode, Pinnick/Gales vocals, and the quirky upbeat touches with a stop-and-go moment that Eric does as he challenges Frank Zappa on his instrument that at times is layered and back into the groove.

This is a really interesting debut for dUg Pinnick, Eric Gales, and Thomas Pridgen to release a debut album. However, there is a lot of energy and spirit between the three of the members who came from various bands and they kicked it up a notch. This is a must have album for 2013 and it’s a highly recommended album for anyone who’s into Funk, Prog, Heavy Soul, Jazz and Hard Rock.
Posted by znathanson at 1:47 AM