Hawkwind - Warrior on the Edge of Time 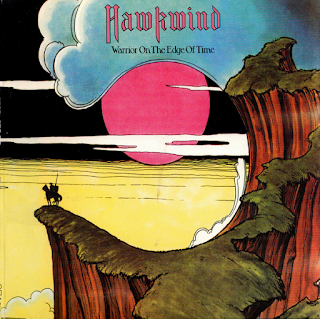 It is considered one of Hawkwind’s finest albums in the history of their career and in the genre of the Space Rock sound in 1975. Through countless bootlegs that have not been done in good conditions and through getting the rights the way the album was meant to be, was almost a struggle. But when Atomhenge announced back in February of this year that they were going to reissue the album during Memorial Day, it was a joy to celebrate into the outer limits. So, let’s have a huge round of applause for Mark Powell to work tooth and nail to give it the fully restored treatment it finally deserves.

Originally released in 1975 on the United Artists label, Warrior on the Edge of Time, Hawkwind’s fifth album is staggering, powerful, sinister, eruptive, and cosmic. It showed the band going through changes from their follow up to previous work; In Search of Space, Doremi Fasol Latido, the live work of Space Ritual, and Hall of the Mountain Grill. They received cult status and word of mouth from the fans and the UK press during their heyday.

The band decided to team up with Sci-Fi writer Michael Moorcock, who’s best known for his work with The Elric Saga and The Eternal Champion, because Dave Brock was a huge fan of his work and it was a match made in heaven and was Robert Calvert’s stand in because Rob was at the time suffering from Bipolar Disorder causing tensions between the members and was placed in a Mental Hospital. Michael came to Hawkwind’s rescue to work on the Warrior sessions and some of the live performances he did for them.

Some of the songs in the album are based on The Eternal Champion which is about a man named John Daker who escapes from the real world and into a different universe by becoming Erekose, and he is send to this planet to lead the human warriors against the aliens called, Eldrien. While the character has attacked them previously, Daker himself is also not on this journey for survival, but to find out whom he really is whether he’s John Daker or the tragic hero, Erekose and whether is the magic real as well.

So, let’s get to the music. Starting the album off is the driven yet electrical thunderstorm 10-minute epic, Assault & Battery /The Golden Void. The lyrics are straight from 19th century American poet, Henry Wadsworth Longfellow, but the composition is a mind-boggling experience. Featuring Lemmy’s bass intro and Simon House’s (High Tide) mellotronic introduction before becoming a harder metallic liftoff between Dave’s vocals and Nik’s eerie Sax work, it shows how much they were ahead of their time before it becomes a doomier view of the future on someone going insane through the corridors as Simon takes the keyboards help throughout the atmosphere.

The Spoken Tracks (The Wizard Blew His Horn, Standing at the Edge, and Warriors) that Nik Turner and Michael Moorcock help out on give a nightmarish detail on the stories. And at times, it very poetic with a dystopian universe as the other pieces have these Dalek like voices that you can imagine being used during the Tom Baker years for Doctor Who. It has some shrieking and asylum-like surroundings behind the pieces and giving the detail of the adventures for the Warrior himself.

Opa-Loka is a thumping atmospheric bass-driven done by Dave Brock, psychedelia with organ-like surroundings with virtuosity on the guitar creating these mysterious hypnotic beauty while Spiral Galaxy 28948 is Simon House’s moment to shine as he takes the keyboards on the synths into uncharted worlds as it resembles this combination of Amon Duul II meets Tangerine Dream meets Devo as it goes through this surrealism waltz-like dance in our solar systems that is mad yet strange composition that Simon just nails it to be the next commander in the Starship Enterprise.

The Demented Man is a calming yet gothic-acid-ambient-space folk rock sound as Brock sings with a gentle relaxation between acoustic guitar, seagulls calling, and the backing mellotron sets the tone of the piece as it resembles an earlier version of Ash Ra Tempel. Then, everything becomes a dangerous combination of protopunk, fiddle, danger, and soaring punches on Magnu with fummeling guitar and bass work, Simon King’s heavy duty drum lines, and House’s sinister violin work with a screeching tone.

Then, everything becomes climatic and cosmic-rock with a vibrating beat on Dying Seas.  This time its Simon House’s moment to shine as he takes his violin into darker territories while the tension level increases to give it a whirling yet terrifying exploration. The closing track, Kings of Speed, goes back into the Spacey mode, but its into the Punk-Rock mode with a shuffling twist not to mention the keyboards and guitar go into overdrive to setting a course back to earth to close the album off with a bang.

The bonus tracks are a real gem that feature different versions of the two spoken word dialog along with a Bob Dylan-sque turned bluesy harmonic jingle on On The Road, but it’s the real attitude with a balls-out touch of early Thrash on Motorhead. Featuring Lemmy’s double-tracking voice and his pummeling bass work, heavy rhythm guitar line, sax, and Simon’s Irish Jig-like sound on the violin, makes it a killer to get you ready for the speed freak to go on an adventure.

There’s also Dave Brock’s version along with and instrumental version on Kings of Speed, but the real fun has only begun. On the second CD, is the 2013 new stereo mix done by Steven Wilson of Porcupine Tree has done a superb job on the remix for the 5.1 sound and I can hear some of the keyboards and drums in the front of the compositions along with Nik’s woodwind instruments. As I’ve mentioned before Steven has done an incredible job on the reissue for the mixes along hearing the mellotron again on Spiral Galaxy being in front as well.

Dawn is more of a jam session that as the lost live sounds that were performed at the Watchfield Free Festival on August 23rd, 1975. Watchfield is a village located as a Civil Parish in the Vale of White Horse and these rare recordings see the band going into hypnotic mode. The Watchfield Festival Jam is actually a 15-minute freak out touch on You Shouldn’t Do That as the spiraling Circles and I Am the Eye, shows the band giving the audience a spiritual yet uplifting experience they’ll never forget.


Even though its not in the best condition, you can tell how much exciting they were having at the Festival and the Audience were cheering them on as they were promoting the album. Atomhenge have scored a knockout with the Deluxe Edition and it’s a home-run. Now if you fancy the Super Deluxe Edition which features the poster and Vinyl, it’s a must have for anybody who admires the music of Hawkwind.
Posted by znathanson at 6:19 PM